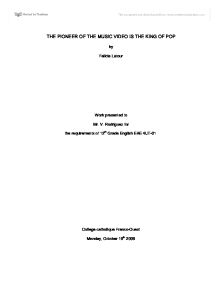 THE PIONEER OF THE MUSIC VIDEO IS THE KING OF POP

THE PIONEER OF THE MUSIC VIDEO IS THE KING OF POP by Felicia Latour Work presented to Mr. V. Rodriguez for the requirements of 12th Grade English EAE 4UT-01 College catholique Franco-Ouest Monday, October 19th 2009 Solo singles hitting No. 1 on the Billboard Hot 100 = 13.1 Weeks Thriller spent on the U.S. charts = 37.2 Solo singles on the Billboard Hot 100 = 47.3 Number of albums sold in the U.S. = 61 500 000.4 Being internationally renowned as the true King of Pop = Priceless. To anyone who's lived on planet Earth for the past 40 years, the mention of the name "Michael Jackson" can trigger any sort of reaction. Although his life was riddled with controversy and abnormal behaviour, his contributions to the world of pop culture are impossible to ignore. Born on August 28th 19585, Michael Jackson began his long and lustrous career as an artist at the tender age of five when he became lead vocalist of his brothers' singing group "The Jackson 5"6. The 60's Motown period of Jackson's career included a ground-breaking Ed Sullivan Show performance, the success of tunes like "I Want You Back", "Who's Lovin You" and "ABC" as well as the release of five studio albums7. ...read more.

Jackson's career skyrocketed thereafter and he later released more legendary music videos like "Bad", "Smooth Criminal" and "Black or White". Although his celebrated music and dance skills met global fame and recognition, Jackson became a victim of excessive news coverage due to his unorthodox lifestyle and bizarre conduct. His personal issues would accumulate over time and, unresolved, inclined Jackson to public infamy as a notorious fame-monger. His death in June of 2009 due to cardiac arrest brought on by an overdose of prescribed medication12 provoked the world's most intense period of grief as the world lost possibly its most recognizable celebrity. To this day he remains the kind of icon that only comes around once in a lifetime, a true global superstar who has forever altered the DNA of pop culture by changing it for the better. Between his signature moonwalk to his classic soprano voice, Michael Jackson created an artistic empire well worth his while. He can be considered a pioneer in various fields but he is undeniably the true pioneer of what we now know as the music video. ...read more.

Jackson's sheer ingenuity and creative genius blurred the lines between what was considered "black" music like R&B and "white" music which was typically rock n' roll. He created a genre that defied all others so that a white man and a black man could come together and appreciate an aspect of life that is colour-blind: music. What upsets me most about Jackson's career is surprisingly not the over-shadowing of his personal life but rather how people underestimate how remarkable it is for a person like Jackson to create something so new and unique that no one has ever seen or done before. One can even compare Jackson's musical creations to be as earth shattering as the discovery of the vaccine for polio. His singular, sensational and staggering artistry set the standard for countless artists to follow and set the tone for what a mega-superstar can do for an audience. Jackson's influence was so pervasive that it is impossible to imagine pop culture without him. However, it is important to remember that the King of Pop's legacy will continue to influence millions of people now and forever. His work as the pioneer of the music video is legendary and can only be equalled by his status as pioneer of diversity, in every way imaginable. ...read more.