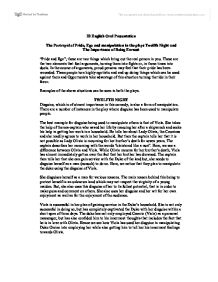 The Portrayal of Pride, Ego and manipulation in the play Twelfth Night

IB English Oral Presentation The Portrayal of Pride, Ego and manipulation in the plays Twelfth Night and The Importance of Being Earnest "Pride and Ego"; these are two things which bring out the real person in you. These are the two elements that fuel arguments, turning them into fights or, in those times into duels. In the course of arguments, proud persons may feel that their pride has been wounded. These people turn highly egotistic and end up doing things which can be used against them and Opportunists take advantage of this situation turning the tide in their favor. Examples of the above situations can be seen in both the plays. TWELFTH NIGHT Disguise, which is of utmost importance in this comedy, is also a form of manipulation. There are a number of instances in the play where disguise has been used to manipulate people. The best example for disguise being used to manipulate others is that of Viola. She takes the help of the sea-captain who saved her life by rescuing her after a shipwreck and seeks his help in getting her work in a household. He tells her about Lady Olivia, the Countess and she readily agrees to work in her household. But then the captain tells her that it is not possible as Lady Olivia is mourning for her brother's death for seven years. The captain describes her mourning with the words "cloistered like a nun". Here, we see a difference between Olivia and Viola. While Olivia mourns for her brother's death, Viola has almost immediately gotten over the fact that her brother has drowned. ...read more.

As a result, the pretended duel never seems to happen. Here we have seen how both Sir Andrew and Cesario (Viola) have been manipulated by Sir Toby into fighting each other. Both these incidents portray Sir Toby as a highly intelligent person. THE GULLING OF MALVOLIO This part of the comedy is the best example for this commentary. Here, we see how Malvolio, Olivia's steward becomes the butt of all jokes. Malvolio is a man who likes to spoil others' fun. This fun-despising attitude of this earns him many enemies. Fabian is the perfect example for this. He had been humiliated by Malvolio before Olivia and hence he decided to take revenge on Malvolio. Hence, he also became the part of the plan to humiliate Malvolio along with Maria, Sir Toby and Feste. Malvolio's pride and highly egotistical nature leads to his downfall. Maria, who is highly intelligent, decides to take revenge on Malvolio by tricking him into believing that Olivia loves him. She writes a love letter in Olivia's handwriting addressed to him. Malvolio reads the letter and is overjoyed as he actually believes that the letter apparently written by Olivia was addressed to him. He is also asked to wear yellow stockings "cross-gartered" and go to Olivia to woo her. The irony of the fact is that Malvolio expects to woo a Countess (Olivia) in that outrageous garb. After he goes to Olivia, he acts really weird and she presumes him mad and calls for a doctor to attend to him as Maria persuades her into thinking so. ...read more.

Jack tells us in Act I that he uses the name Ernest as an excuse to come to town. We get to know that he is actually known as Mr. John Worthing in the country whereas Ernest (his town name) is known to them as his brother. He uses the excuse of meeting his "brother" to go to town where he is known as Ernest. Hence, we see how he has been manipulating his ward into believing that he has a brother in town by using his parallel identity. He also tries to manipulate his lover Gwendolen into believing that his name is Ernest. Algernon is also doing something similar to this. In this case, he has invented a brother called Bunbury who is known to everyone as an invalid. Here, Algernon uses him as an excuse to go and "dawn in the country". When he comes to the country to see Cecily, he introduces himself as Ernest. He then plays along the part of Ernest who Jack has introduced as his brother. Cecily falls in love with him believing he is Ernest and this situation is like a knot which is difficult to entangle. Both Jack and Algernon manipulate almost everyone in the play with the scenario of their parallel lives which Algernon refers to as "Bunburying". Conclusion So, we have seen how pride, ego and manipulation have been portrayed in the plays Twelfth Night and Importance of being Earnest. In some instances, they have been used against them, whereas in other instances, we have seen how people who have been manipulating others are found out towards the end. ...read more.