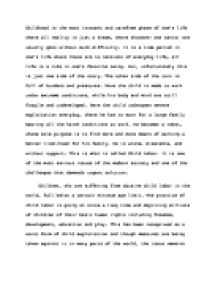 The practice of child labor is going on since a long time and depriving millions of children of their basic human rights including freedom, development, education and play.

Childhood is the most innocent and carefree phase of one's life where all reality is just a dream, where whatever one wants; one usually gets without much difficulty. It is a time period in one's life where there are no tensions of everyday life, all life is a ride in one's favorite swing. But, unfortunately this is just one side of the story. The other side of the coin is full of burdens and pressures. Here the child is made to work under extreme conditions, while his body and mind are still fragile and undeveloped. Here the child undergoes severe exploitation everyday, where he has to earn for a large family bearing all the harsh conditions at work. He becomes a robot, whose sole purpose is to find more and more means of earning a better livelihood for his family. He is alone, miserable, and without support. This is what is called Child Labor. It is one of the most serious issues of the modern society and one of the challenges that demands urgent solution. Children, who are suffering from abusive child labor in the world, fall below a certain minimum age limit. The practice of child labor is going on since a long time and depriving millions of children of their basic human rights including freedom, development, education and play. ...read more.

By then, a large number of children were already working in mines, textiles, glass factories, and home industries. By the eighteenth century, industrialization had promoted the use of child labor force to boost up productivity. This trend continued and by the nineteenth century, children had become an indispensible part of industrial employment in the sectors of textiles and coal mining. As an example in the U.S. coal industry in the mid-1990s, about thirteen percent of the total work force was below the age of fifteen. It had been observed that in those industries child labor was gender divided. Boys were assigned tasks mainly in coal mines and sawmills. On the other hand, girls worked in the textile industries. In the United States, it was industrialization that opened new avenues of earning for these young children after the Civil War (1861-1865). This greatly increased child labor in such industrial areas of the U.S. according to a census of 1870; approximately two out of every nine children in the United States were employed. This trend was further reinforced by immigrant families who moved to the United States in search for better employments for the whole family. They were mentally prepared to offer their young ones as labor force for different industries and this inclination promoted the rise in child labor in years in which immigration peaked. ...read more.

Dagenhart (1918) involving the power of Congress to enact child labor laws. In 1924, the Senate passed a Constitutional amendment banning child labor. This was not approved by the state. The Fair labor Standards Act of 1938 finally restricted full employment of children less than sixteen years of age. This was ratified by the Supreme Court as well. Though there were many laws enforced to completely ward off the evils of child labor in the United States, many economic analysts observe that these laws were not the only reason for eliminating child labor. it was the rapid economic stability due to industrialization that allowed some freedom to these children as their parents/guardians were able to obtain decent incomes even without their children's contributions. Many reasons for this reduction in child labor trends can be an expansion in the educational infrastructures all over the U.S., high returns from acquiring education, and technological changes in the proc3esses of business sector. In order to eliminate the menace of child labor from all societies, everyone needs to fulfill certain duties. While the State enforces laws in this regard, it is the duty of poor families to seek family planning mechanisms so that they are not burdened by children. We should all take some steps in the right direction so that our children may be enabled to enjoy the very blessings and innocence of their childhoods. ...read more.