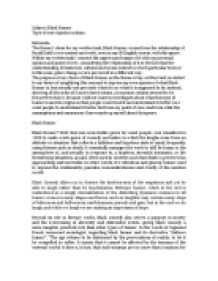 The Purpose of Black Humour

﻿Subject: Black Humor Type of text: Opinion column Rationale: The theme I chose for my written task, Black Humor, comes from the relationship of Roald Dahl?s own context and work, seen in my IB English course, with this genre. Within my written task I connect the aspects and usage of it with my personal opinion and point of view, considering the relationship of it to the fact that the understanding of historical, cultural and social context in which particular texts or in this case, genre change or are perceived in a different way. The purpose of my choice of Black Humor as the theme of my written task is related to my desire of amplifying this concept to express my own opinion of what Black Humor is, but actually not precisely what it is or what it is supposed to be, instead, showing all the sides of it and what it means. ...read more.

It essentially manages the work to still be funny in the atmosphere of, and actually in response to, a hopeless, stressful, traumatic, or life threatening situations, as said, often used in contexts such that death is perceived as approaching and inevitable. In other words, it’s ridiculous and gloomy humor used to express the irrationality, paradox, inconsiderateness and cruelty of the modern world. Black Comedy allows us to foresee the faceless-ness of the emptiness and yet be able to laugh rather than be hopelessness. Entropic humor, which in the end is understood as a simply intensiï¬cation of the disturbing dynamics common to all humor, comes in many shapes and forms, and our laughter may contain many steps of bitterness and hollowness, mirthlessness, parody and pain, but in the end we do laugh, and while we laugh we are making an impression of hope. ...read more.

The ability to laugh at the prospect of challenges or general difficulties is perhaps the greatest display of superiority over them. In this sense, black humor does not only offer a clever use of comedy at moments where laughing, a display of joy, comes almost at complete odds when juxtaposed with the sorrowful events it is used in, but also proves useful at strengthening the morale of the challenged, as well as undermining that of possible challengers, making it stand out amongst simpler forms of comedy. One must not look far to find the reason behind the complexity of black humor, for it becomes apparent in its very definition. I would agree, as you will if your wits are about you, that successfully turning a dismal situation in to something comical is more challenging than bringing about laughs while regarding already cheerful subjects. ...read more.