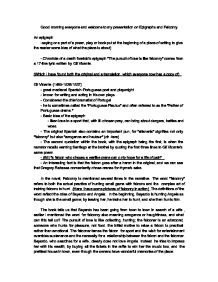 Good morning everyone and welcome to my presentation on Epigraphs and Falconry. An epigraph -saying or a part of a poem, play or book put at the beginning of a piece of writing to give the reader some idea of what the piece is about) - Chronicle of a death foretold's epigraph "The pursuit of love is like falconry" comes from a 17-line lyric written by Gil Vicente. (Which I have found both the original and a translation, which everyone now has a copy of) Gil Vicente (1465-1536/1537) - great medieval Spanish-Portuguese poet and playwright - known for writing and acting in his own plays. - Considered the chief dramatist of Portugal - he is sometimes called the "Portuguese Plautus" and often referred to as the "Father of Portuguese drama." - Basic idea of the epigraph: - liken love to a sport that, with ill-chosen prey, can bring about dangers, battles and woes. - The original Spanish also contains an important pun, for "altaneria" signifies not only "falconry" but also "arrogance and hauteur" (oh-tare) ...read more.

Bayardo, who searches for a wife, clearly does not love Angela. Instead he tries to impress her with his wealth, by buying all the tickets in the raffle to win her the music box, and the prettiest house in town, even though the owners have wonderful memories of the place. As we can see, Bayardo chooses his wife similar to the way a falconer selects a falcon. He never needed a wife, he just wanted a woman to be his wife, an object of show rather than necessity. He came to town to find the ideal wife, and he finds Angela Vicario, who possessed most of the qualities of a perfect bride. She had, along with her sisters, been reared to get married. She knew how to do screen embroidery, sew by machine, weave bone lace, wash and iron, make artificial flowers and fancy candy, and write engagement announcements" Her mother was even frequently heard saying "they're perfect" (31). ...read more.

The most important thing is that she is his. As we can see, the pursuit of love really is like falconry. To conclude, I'd like to quote an unknown person, "If you love something, set it free, if it comes back to you, it is yours, if it doesn't, it never was." ADD MORE QUOTATIONS AAHHHHHH Poema Halcon Que Se Atreve de Gil Vicente Halc�n que se atreve con garza guerrera, peligros espera. Halc�n que se vuela con garza a porf�a cazarla quer�a y no la recela. Mas quien no se vela de garza guerrera, peligros espera. La caza de amor es de altaner�a: trabajos de d�a, de noche dolor. Halc�n cazador con garza tan fiera, peligros espera. FALCON AND HERON. The falcon that dares With heron to fight Has danger in sight. The falcon that flies And with heron would race, So keen on the chase That not hidden it lies, But still with it vies, And fears not its might, Has danger in sight. And the chase of love Is high falconry, That by day misery, By night sorrows prove. The falcon that strove With heron in flight Had danger in sight. ...read more.