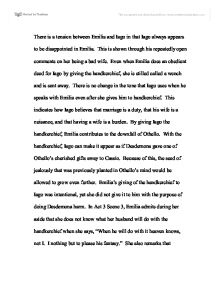 The Relationship Between Iago and Women

There is a tension between Emilia and Iago in that Iago always appears to be disappointed in Emilia. This is shown through his repeatedly open comments on her being a bad wife. Even when Emilia does an obedient deed for Iago by giving the handkerchief, she is stilled called a wench and is sent away. There is no change in the tone that Iago uses when he speaks with Emilia even after she gives him to handkerchief. This indicates how Iago believes that marriage is a duty, that his wife is a nuisance, and that having a wife is a burden. ...read more.

In Act 3 Scene 3, Emilia admits during her aside that she does not know what her husband will do with the handkerchief when she says, "When he will do with it heaven knows, not I. I nothing but to please his fantasy." She also remarks that Desdemona will run mad when she finds out that she lost it and offers to take the handkerchief back to her. This indicates that she is loyal to both her husband and Desdemona. Women in Elizabethan times were expected to be obedient and Iago has said previously that she makes for a bad wife. ...read more.

Emilia is portrayed as not being very intelligent and therefore it is not she who is viewed as accountable in the eyes of the audience, but rather Iago, who originally asked her for the handkerchief. Her lines in III, iv 176-185 may be reflective of herself in that she has become increasing jealous of Desdemona and her husband. In the speech made by Desdemona to Emilia on III, iv, 130-140, Desdemona mentions that she is not an expert and doesn't have much experience with the feelings of men. Emilia who tries to help Desdemona, reveals what she knows through her experiences. Through trying to help both her husband and Desdemona, Emilia inadvertently furthers Iago's scheme. ...read more.