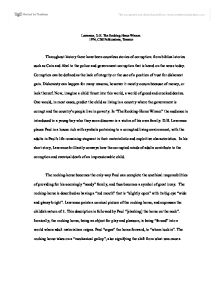 Lawrence, D.H. The Rocking-Horse Winner. 1974, CBS Publications, Toronto Throughout history there have been countless stories of corruption: from biblical stories such as Cain and Abel to the police and government corruption that is heard on the news today. Corruption can be defined as the lack of integrity or the use of a position of trust for dishonest gain. Dishonesty can happen for many reasons, however it mostly occurs because of money, or lack thereof. Now, imagine a child thrust into this world, a world of greed and crooked desires. One would, in most cases, predict the child as living in a country where the government is corrupt and the country's people live in poverty. In "The Rocking-Horse Winner" the audience is introduced to a young boy who they soon discover is a victim of his own family. D.H. Lawrence places Paul in a house rich with symbols pertaining to a corrupted living environment, with the adults in Paul's life remaining stagnant in their materialistic and exploitive characteristics. In his short story, Lawrence brilliantly conveys how the corrupted minds of adults contribute to the corruption and eventual death of an impressionable child. ...read more.

Instead, Lawrence offers the protagonist an adult companion: Uncle Oscar, which further isolates Paul and separates him from his childhood. "Honour bright" is repeated throughout the short story, giving a sense of understanding between Paul and his uncle. The repeated phrase exemplifies the friendship and trust that Paul has put into his uncle. The irony is that the uncle is also a part of gambling on horse races. This closeness continues to corrupt the growth of the child, quickly resulting in Uncle Oscar becoming a partner of business rather than a companion. Throughout the short story, the materialism of the mother is mentioned many times, causing the impressionable Paul irreparable harm. Although "they lived in style," it seemed there was "never enough money". Never enough money, and yet the family had "discreet servants" and at Christmas "expensive and splendid toys filled the nursery". Paul's parents have enough income to support the family and yet the whispers of "There must be more money!" still occur. Lawrence skillfully integrates this phrase eight times on the same page. It engrains itself into the memory and subconscious of the reader, providing an immense impact. ...read more.

The mere mention of being separated from the rocking horse causes Paul to become overwrought. Paul speaks with an authority, stating "you needn't worry mother, if I were you." Paul and his mother's relationship has become not one of a son and his mother, but Lawrence expresses an adult understanding between the two, again signifying of the drastic transformation Paul has undergone. The mother's acceptance leads Paul deeper into his addiction, until finally his eyes loose all passion and childlike features, becoming "blue stones". D.H. Lawrence incorporates the use of symbols, irony, and characters to expertly explore how children may become corrupt in accordance to their surroundings. Paul was treated as if he was an adult at a very young age. His mother "did not want her son's privacy intruded upon", exemplifying the corrupt parenting throughout the short story. Parents must introduce their children to the realities of the world; otherwise children would be living in a false dream-like world where "ignorance is bliss". The audience must ask itself: To what extent do we treat children like adults, and what responsibilities do parents entrust their children with? "We cannot fashion our children after our desires, we must have them and love them as God has given them to us." Johann Wolfgang von Goethe ...read more.