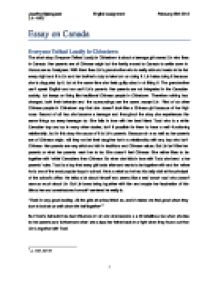 The short story Everyone Talked Loudly in Chinatown is about a teenage girl named Lin who lives in Canada.

Essay on Canada Everyone Talked Loudly in Chinatown The short story Everyone Talked Loudly in Chinatown is about a teenage girl named Lin who lives in Canada. Her parents are of Chinese origin but the family moved to Canada to settle down in Vancouver as foreigners. With them lives Lin's grandmother who is really sick and needs to be fed every night and it is Lin and her brother's duty to take turn on doing it. Lin hates doing it because she is disgusted by it, but at the same time she feels guilty about not liking it. The grandmother can't speak English and nor can't Lin's parents. Her parents are not integrated in the Canadian society, but keeps on living like traditional Chinese people in Chinatown. Therefore nothing has changed, both their behavior and the surroundings are the same, except Lin. First of do other Chinese people in Chinatown say that she doesn't look like a Chinese girl because of her high nose. Second of all has she become a teenager and throughout the story she experiences the same things as every teenager do. She falls in love with her best friend Todd who is a white Canadian boy and as in many other stories, isn't it possible for them to have a well-functioning relationship, but in this story the cause of it is Lin's parents. ...read more.

For example when Lin feds her grandmother she think of what Todd wouldn't think of her. Therefore she is not necessarily hiding Todd from her parents but just because it's easier than having an argument about it. After having slapped her father, Lin goes to her grandmother and she seems to realize that she needs her grandmother. The grandmother is there for her after the fight with the parents. She takes her grandmothers hand and stays there all night. Therefore is another conflict in the story that Lin feels guilty for not being close to her grandmother who is dying of sickness. Lin remembers when she girl, how her grandmother would take her to Chinatown for treats, but eventually Lin got tired of all the loud talk and stopped going. Lin realizes that she isn't like the people in Chinatown. They are uncivilized and they annoy her. Therefore she doesn't want to be a part of it. Instead she "started to play with friends who weren't loud and who weren't Chinese." Again it's Lin progression away from her own birth culture that causes the distance between her and the grandmother. When Lin feels disgusted by feeding her grandmother it's because Lin can't really accept the fact that herself and her grandmother's roles had turn. ...read more.

Derudover afspejler tekst 2 ogs� et mere moderne sprog ved at bruge sammentr�kninger, s�som 'what's' og 'You're'. Selvom tekst 1 godt kan virke st�rkere i troen vha. det �ldre og mere formelle sprogbrug, bruger tekst 2 udr�bstegn for at forst�rke ordene og meningen af dem. Til geng�ld er tekst 2's brug af slang og uformelt sprog en kende upassende til det h�jtidelige i et fadervor. Endvidere bruges Amen som afslutning p� ens b�n, alts� Fadervor. En understregning af noget der er sandt, at det st�r fast og er trov�rdigt, og den enkeltes svar p� b�nnen - Ja. Derfor bruges 'yes' i stedet for 'amen' i tekst 2. Opgave D English translation: A thirteen-year-old French girl who was in a coma, voke up and spoke fluent German. It is rather strange because her skills in German was not very good. She was just starting to have the subject in the school and had only seen a little bit of German TV. Since she woke up two weeks ago, however has it only suceeded the parents to communicate with her in German. "In the past did people look at this as a miracle, but personally I think there is a completely logical explanation", says an expert in the field. 1 p. 137, ll.9-10 2 p. 139, ll. 1-3 ?? ?? ?? ?? [Skriv tekst] [Skriv tekst] [Skriv tekst] Josefine Kj�rsgaard English assignment February 28th 2012 3.h - MfG 1 ...read more.