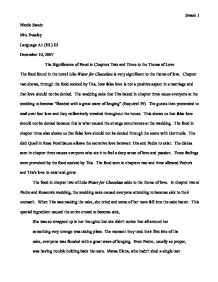 Swain 1 Nicole Swain Mrs. Feasley Language A1 (HL) III December 10, 2007 The Significance of Food in Chapters Two and Three to the Theme of Love The food found in the novel Like Water for Chocolate is very significant to the theme of love. Chapter two shows, through the food cooked by Tita, how false love is not a positive aspect in a marriage and that love should not be denied. The wedding cake that Tita baked in chapter three cause everyone at the wedding to become "flooded with a great wave of longing" (Esquivel 39). The guests then proceeded to wail over lost love and they collectively vomited throughout the house. This shows us that false love should not be denied because this is what caused the strange occurrences at the wedding. The food in chapter three also shows us that false love should not be denied through the scene with Gertrudis. The dish Quail in Rose Petal Sauce allows the secretive love between Tita and Pedro to exist. The dishes seen in chapter three causes everyone who ate it to feel a deep sense of love and passion. These feelings were provoked by the food cooked by Tita. The food seen in chapters two and three allowed Pedro's and Tita's love to exist and grow. ...read more.

One couple finds love because of the recipe Quail in Rose Petal Sauce and the other couple's love was allowed to persist because of this recipe. The reason Tita prepared this is because Pedro had given her roses earlier in the day. The thorns on the roses had pricked Tita's hands and breasts causing the roses to turn red from the blood. "Tita's blood and the roses from Pedro proved quite an explosive combination" (Esquivel 51). This combination is what caused Gertrudis' strange transformation. On her the food seemed to act as an aphrodisiac, she began to feel an intense heat pulsing through her limbs. An itch in the center of her body kept her from sitting properly in her chair. She began to sweat, imagining herself on horseback with her arms clasped around one of Pancho Villa's men: the one she had seen in the village plaza the week before, Swain 3 smelling of sweat and mud, of dawns that brought uncertainty and danger, smelling of life and of death (Esquivel 51-52). This quote portrays Gertrudis' reaction to the meal. The Quail in Rose Petal Sauce recipe provoked feelings of love inside Gertrudis. She thought of Juan, her future husband, and her sexual desires for him. ...read more.

This extract from the novel once again shows the influence the food had on the characters and their feelings of love. It relates to the quote from chapter three about the recipe, Quail in Rose Petal Sauce. The quote shows the difference between food made with love and food made with jealousy and hate. The food caused the guests at the wedding to feel intense feelings of desire towards the person they loved. It provoked feelings that the couples may not have found otherwise. The novel Like Water for Chocolate had many examples of food affecting love. The entire novel had food intertwined within it. The theme of food influenced the love felt throughout the novel. The love between Gertrudis and Juan was brought about by the recipe Quail in Rose Petal Sauce. The love between Alex and Esperanza was brought even closer by the food. The wedding of Pedro and Rosaura showed that a relationship filled with jealousy and lies does not create a positive outcome. This was shown in the food cooked for that wedding. This novel shows us that food cooked with love creates love inside a person, but food cooked with envy creates feeling of sadness and desire. Tita proved to be an exquisite cook. Without her, this relationship between food and love would not have existed. "Cooking is like love, it should be entered into with abandon or not at all." -Harriet Van Horne. ...read more.