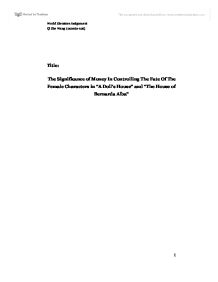 Title: The Significance of Money In Controlling The Fate Of The Female Characters in "A Doll's House" and "The House of Bernarda Alba" Money is closely tied with wealth and the stature in society from many different cultures. It is to no surprise that the significance of money is best demonstrated in plays of social realisms, such as "A Doll's House" and "The House of Bernarda Alba". Although money often symbolizes a person's class in the society in the field of literature, but in particular it is also a symbol of independence. The two playwrights have interpreted this idea of money in a similar fashion, where the female characters of both plays are trapped by a lack of wealth. Nora was withheld from her role of a woman because of her debt to Krogstad. Alternatively, Adela was not entitled to marry Pepe el Romano because she did not inherit any money from her deceased stepfather. Therefore, by analyzing the significance of money, we can gain insights into how it symbolizes the conflicts or character developments in the plot. This paper will compare the ways in which money is used for the above purposes in both plays. Money and property ownership were perceived as symbols of liberty and independence from the beginning of civilization. Early in the play "A Doll's House", we are shown the contrast in the female characters of Nora and Adela, who are all trapped by a lack of wealth. ...read more.

Nora was once willing to sacrifice her own life in order to keep a decent reputation for Torvald and for her family. We are told: Never to see him again. Never, never, never. Never to see the children again. Never, never. Oh that black, icy water! Oh that bottomless - ! If it were only over! Now he has it; he's reading it. Oh no, no, no, not yet. Torvald, good-by - ! Good-by, my little ones - ! However, once Torvald found out about Nora's debt, he showed no intention of sacrificing anything for Nora, thinking only of himself and of his own reputations. This shows how the debt Nora owns to Krogstad has turned down her expectations for Torvald and also made Nora to start questioning about her own life, causing conflicts to arise between the married couple. We have been married eight years. Does it not strike you that this is the first time we two, you and I, man and wife, have talked seriously? Once Nora realizes that she had been trapped in her family because she was financially dependent on Torvald, she chose to walk out on her husband instead of committing suicide, which reflects an increased understanding of independence on her own behalf. This remark completes Nora's transformation from a "doll" to a fully independent woman. Parallels on the treatment of money can be found in the play "The House of the Bernarda Alba". ...read more.

Bernarda sees the lower classes as animals, she claims that: 'The poor are like animals' This portrays Bernarda's attitude on marriage as she judges the men in her neighborhood based on their class in the society, and then decides on whether if he's suitable for her daughters' economic ideal. Bernarda's view on marriage can be interpreted as a criticism to the class system that was implemented during the time when the play took place. In such circumstances, wealth plays a major contributory factor in controlling the fate of the female characters. Bernarda's attitude also prevented Martirio to get married in the first place, we are told that that she banished the man named Humanas to marry her: My blood will never mix with that of the Humanas family - not as long as I live! His father was a field hand! This has caused Martirio to be jealous and bitter of the fact that Adela is having a clandestine affair with the most handsome man in town, and it became the driving force behind Adela's tragic death. The treatment of money as a driving factor of the plot in both plays "A Doll's House" and "The House of Bernarda Alba" is evident. Nora and Adela are different types of character, which allows them to possess different perspectives about life. Nora's character development in the play has allowed her to gain an increased understanding of independence, therefore she chose to walk out on Torvald to end her trapped marriage. Alternatively, Adela's strong determination to stay with the one she truly loves has left her no room but death. ...read more.