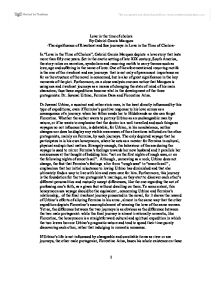 Love in the time of cholera By Gabriel Garcia Marquez -The significance of Riverboat and Sea journeys in Love in the Time of Cholera- In "Love in the Time of Cholera", Gabriel Garcia Marquez depicts a love story that lasts more than fifty one years. Set in the exotic setting of late XIX century, South America, the story relies on narration, symbolism and recurring motifs to carry themes such as love, age and suffering in the name of love. One of the aforementioned recurring motifs is the one of the riverboat and sea journeys that is not only of paramount importance as far as the structure of the novel is concerned, but is also of great significance in the key moments of the plot. Furthermore, on a close analysis one can notice that Marquez is using sea and riverboat journeys as a means of changing the state of mind of his main characters; thus these expeditions become vital in the development of the three protagonists: Dr. Juvenal Urbino, Fermina Daza and Florentino Ariza. Dr Juvenal Urbino, a succinct and rather stoic man, is the least directly influenced by this type of expeditions; even if Fermina's positive response to his love comes as a consequence of a journey: when her father sends her to Hildebranda so she can forget Florentino. ...read more.

If Urbino's life is not influenced by changeable and unreliable items as river or sea journeys, the other male protagonist, Florentino Ariza, bases his whole existence on these voyages. To make the difference between the two men even more obvious the author uses this recurring motif to show that Florentino, being led more by emotion rather than reason, is by far more affected by this element of change. Moreover, the character is defined by three situations which are all journeys, and even so, to show the strong liaison with the concept of journeys, Marquez makes his character work for almost all his adult life in a riverboat company. The first definitive element in the creation of the protagonist's character, which could be in fact considered the intrigue of the novel, consists of Fermina's riverboat journey to her cousin Hildebranda. The physical journey is of little value and it is only a proof of Florentino's obsession with love, as he is prepared to go to any lengths to talk with the object of his affection, but the fact that, during the voyage, Fermina undergoes a serious change is by far more relevant in their love story. This river journey changes the woman's mind about her love for Florentino and she realises that he is nothing more than a shadow: "Today when I saw you, I realised that what is between us is nothing more than an illusion". ...read more.

In the twilight of her life she undergoes one last journey with Florentino, and she then leaves behind the only thing that could still be discarded, society and family: "would it be possible to make a trip without stopping, without cargo or passengers, without coming into any port, without anything?" Thus, for Fermina the river and sea journeys are a way of leaving behind and starting again. Whether it is alongside Urbino or Florentino, these expeditions have the character of an incipit and after each and every one of them she is reborn, reconfigured and ready to start a new part of her life. By way of conclusion, it would be safe to state that whether they are on sea or river, voyages represent an important part in the lives of the protagonists. Unconsciously, their character changes, or they trigger modifications in either other characters or in the course of the actions, and Marquez uses such a technique to show that the three characters are merely human. Like human beings, Florentino Ariza, Dr. Juvenal Urbino, and Fermina Daza, have flaws, can change or not change, can love or hate, can adapt or not, and all this is best shown through the recurring motif of river and sea journeys. In "Love in the time of Cholera", voyages on water are converted into more than a physical process, they are in fact a mental and spiritual journey that will transform the characters involved forever. ?? ?? ?? ?? 1 ...read more.