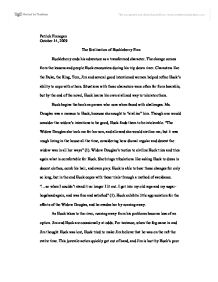 The Sivilization of Huckleberry Finn

Patrick Finnegan October 14, 2009 The Sivilization of Huckleberry Finn Huckleberry ends his adventure as a transformed character. The change comes from the lessons and people Huck encounters during his trip down river. Characters like the Duke, the King, Tom, Jim and several good intentioned women helped refine Huck's ability to cope with others. Situations with these characters were often far from bearable, but by the end of the novel, Huck learns his own sivilized way to tolerate others. Huck begins the book as person who runs when faced with challenges. Ms. Douglas was a menace to Huck, because she sought to "sivilize" him. Though one would consider the widow's intentions to be good, Huck finds them to be intolerable. "The Widow Douglas she took me for her son, and allowed she would sivilize me; but it was rough living in the house all the time, considering how dismal regular and decent the widow was in all her ways" (1). ...read more.

Dat truck dah is trash; en trash is what people is dat puts dirt on de head er dey fren's en makes 'em ashamed" (85). As Huck was looking for a quick joke, Jim genuinely cared for Huck's well being. The friction of their two motives calibrates Huck's moral compass, and Huck learns about compassion. "It made me feel so mean I could almost kissed his foot to get him to take it back. It was fifteen minutes before I could work myself up to go and humble my self to a nigger; but I done it, and I warn't ever sorry for it afterward, neither" (86). Huck's ability to listen to his conscience enabled him to deal with a problem in a fashion that Huck had never experienced before. "I didn't do him no more mean tricks, and I wouldn't done that one if I'd 'a' knowed it would make him feel that way" (86). Huck expands on his toleration skills as other characters come into his life. ...read more.

In all, Huck figures that as long as he is not affected by the outcome he should not bother with the means. Huck's ability to understand and comply with others was brought about by his experiences on his travel down river. Perhaps his passives tactics were something he knew the entire trip but it took a catalytic moment, like the one Huck shared with Jim in the fog, to make him realize the importance of complying with others. Huck's adventure ends with him going to live with Aunt Sally, which in a way is Huck being given a second chance in civilization. "Sally she's going to adopt me and sivilize me, and I can't stand it. I been there before" (293). One can not predict what Huck will do as Aunt Sally tries to civilize him, but I can reckon that Huck will be able to tolerate the process with a degree of compliance that is filled with a new found compassion of others. ...read more.