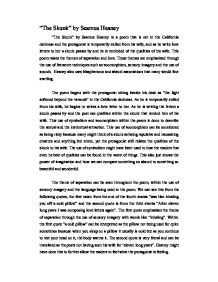 "The Skunk" by Seamus Heaney "The Skunk" by Seamus Heaney is a poem that is set in the California darkness and the protagonist is temporarily exiled from his wife, and as he write love letters to her a skunk passes by and he is reminded of the qualities of his wife. This poem raises the themes of separation and love. These themes are emphasized through the use of literature techniques such as zoomorphism, sensory imagery and the use of sounds. Heaney also uses blasphemous and absurd associations that many would fine startling. The poem begins with the protagonist sitting beside his desk as "the light softened beyond the veranda" in the California darkness. As he is temporarily exiled from his wife, he begins to writes a love letter to her. As he is writing the letters a skunk passes by and the poet see qualities within the skunk that remind him of his wife. ...read more.

We can see this from the following quotes, the first taken from the end of the fourth stanza "was like inhaling you off a cold pillow" and the second quote is from the third stanza "After eleven long years I was composing love letters again". The first quote emphasizes the theme of separation through the use of sensory imagery with words like "inhaling". Within the first quote "a cold pillow" can be interpreted as the pillow not being used for quite sometimes because when you sleep on a pillow it usually is cold but as you continue to rest your head on it, the body warms it. The second quote is very literal and can be translated as the poets not having seen his wife for 'eleven long years". Heaney might have done this to further allow the readers to feel what the protagonist is feeling. ...read more.

This can be seen in the first stanza "At a funeral mass, the skunk's tail". Many of these associations can be interpreted as absurd and irrational, but they can also be seen with a different perspective. These associations can be seen and sacred and sexual, sacred because the poet is relating the skunk to the garments of a priest and a funeral mass, these both are very sacred. It can also be seen as sexual because again the protagonist is finding the most beautiful attributes of the skunk and relating it to his wife. Through the various uses of literary techniques such as zoomorphism, sensory imagery and the use of sounds and the associations that Heaney makes it insinuates and raises both the themes of love and separation that are portrayed in within the play. In conclusion, Heaney uses these themes and techniques to emphasize, that great and beautiful qualities can be found in the most noxious, repulsive and absurd things. ...read more.