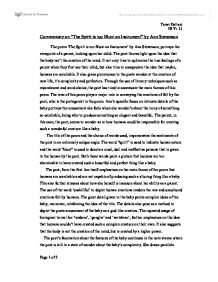 The spirit is too blunt an instrument analysis

Commentary on "The Spirit is too Blunt an Instrument" by Ann Stevenson The poem 'The Spirit is too Blunt an Instrument' by Ann Stevenson, portrays the viewpoint of a parent, looking upon her child. The poet throws light upon the idea that the body isn't the creation of the mind. It not only tries to epitomize the true feelings of a parent when they first see their child, but also tries to encapsulate the idea that maybe, humans are unreliable. It also gives prominence to the poets wonder at the creation of new life, it's complexity and perfection. Through the use of literary techniques such as enjambment and word choice, the poet has tried to accentuate the main themes of this poem. The tone of this poem plays a major role in conveying the emotions of felt by the poet, who is the protagonist in the poem. Ann's specific focus on intricate details of the baby portrays the amusement she feels when she wonder's about the irony of something so unreliable, being able to produce something so elegant and beautiful. The parent, in this case, the poet, seems to wonder as to how humans could be responsible for creating such a wonderful creature like a baby. ...read more.

While before the poet focused more on the external features, there is a gradual shift to the baby's internal features seen. This is done to indicate the increasing level of stupefaction of the poet. Again, there is a sense of awe and wonder at the intricacy of the baby's body. The line 'completed body already knows the answers to the brain' connotes the robot like feelings and behaviour of humans, thus underlines the human spirit as insensitive and inefficacious of creating a baby. The poet further elucidates how one cannot define or explain a human thought or emotion simply or particularly accurately. The choice of the word 'habit' could refer to evolution, where the process has been repeated over and over again 'till it's perfect. The baby is unconscious in the womb, and so is perfect until the mind becomes active. When this happens, the baby will no longer be perfect. It will inherit the flaws of the mind. The baby is ignorant of feelings when it is born, but as soon as it starts to 'invent love and despair and anxiety and their pain'. This point is illustrated by the poem ends on a negative note by using the word"despair" to represent the loss of brilliance as the baby grows up. ...read more.

The use of enjambment throughout the poem is used to exemplify the poet's awe and wonder of creation. The thoughts of the poet are so fast and frequent that it is portrayed by the use of enjambment. The poet also uses symbolism by using the baby as a creation of god and humans as the evils that are present in the world today. The poet uses fullstops to separate her thoughts in the poem, which futher accentuates on the fascination and enticement of the poet. The poet uses personification is a different way by giving the 'Spirit' a cruel and diabolical personality. This is used to make it easier for the reader to draw parallels between humans and the spirit, in terms of behaviour and personality, highlighting the main theme. Throughout the poem, Ann Stevenson has succesfully brought out the theme of wonder and admiration of the concept of creation through portrayal of the baby and the spirit. The poet has also been able to highlight the aspect of the evils in society and its imapct on us, through the use of literary features and language. Through the use of word choice, the poet has manifested the theme of the body not being a creation of the mind, but instead, being some sort of a miracle. Word Count: 1321 words Tanvi Dattani IB Yr 11 Page 1 of 1 ...read more.