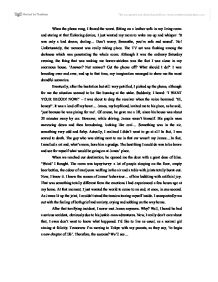 The story beginning with 'When the phone rang...'

When the phone rang, I feared the worst. Sitting on a leather sofa in my living room and staring at that flickering device, I just wanted my mom to wake me up and whisper: 'It was only a bad dream, darling... Don't worry, Samantha, you're safe and sound'. No! Unfortunately, the moment was really taking place. The TV set was flashing among the darkness which was penetrating the whole room. Although it was the ordinary Saturday evening, the thing that was making me horror-stricken was the fact I was alone in my enormous house. 'Answer? Not answer? Cut the phone off? ...read more.

James, my boyfriend, invited me to his place, as he said, 'just because he was pining for me'. Of course, he gave me a lift, since his house was about 20 minutes away by car. However, while driving, James wasn't himself. His pupils were narrowing down and then broadening, looking like coal... Something was in the air, something very odd and fishy. Actually, I realized I didn't want to go at all! In fact, I was scared to death. The guy who was sitting next to me in that car wasn't my James... In fact, I smelled a rat and, what's more, bore him a grudge. ...read more.

At that moment, I just wanted the world to come to an end, at once, in one second. As James lit up the joint, I couldn't stand the tension tearing myself inside. I unexpectedly ran out with the feeling of both grief and anxiety, crying and sobbing on the way home. After that terrifying incident, I never met James anymore. Why? Well, I heard he had a serious accident, obviously due to his junkie-man-adventures. Now, I really don't care about that, I even don't want to know what happened. I'd like to live as usual, as a normal girl aiming at felicity. Tomorrow I'm moving to Tokyo with my parents, as they say, 'to begin a new chapter of life'. Therefore, the success? We'll see... ...read more.