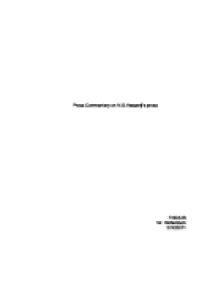 The story in the prose written by M.G.Vassanji takes place in Tanzania, a country in East Africa where is undeveloped and strict on the religion. Through the use of imagery, diction and punctuations, it concerns the theme of identity,

Prose Commentary on M.G.Vassanji's prose ENG3UB Mr. Richardson 2/10/2011 The story in the prose written by M.G.Vassanji takes place in Tanzania, a country in East Africa where is undeveloped and strict on the religion. Through the use of imagery, diction and punctuations, it concerns the theme of identity, the text describes how much people can be influenced by religion and gender under a certain type of culture; as well, it shows how adults are more mature than youths. The author uses lots of imagery in the text to show the ambient and the situation the brother and the sister are in. He first describes the mosque, it is huge and beautiful; the light bulbs show that there is a celebration going on, and the clock tolls at ten-thirty; on the street, a dog is barking while a bicycle is ringing its bell. This is like any other normal peaceful places with a mosque, yet suddenly there are screams coming out from the shadows, and six youths jump out, "howling like wild dogs, gesturing like demons, mouthing all manner of obscenities; they surrounded us." ...read more.

The diction used through the whole piece mostly shows how the reactions are different between adults and youths. There are two adults in the story, one is a local millionaire, Mr. Bapu; the other is the brother and the sister's uncle, Mahesh. Both of them teach something. Mr. Bapu saved their lives when they are surrounded in danger, and he "swerved" to the gate "where [they] stood trapped". The word "swerve" shows the personality of Mr. Bapu, as soon as he sees them in trouble, he swerves to them and scare the attackers away. Although no one knows Mr. Bapu's original intention, he is also a positive person who likes to give out help. After he knows the matter with the brother and the sister, he still accepts them, although he shows his uncomfortable and ignorance for them, because he does not take them for a tour in garden nor offer them a lavish breakfast, but talk with the elder gardener amiably. ...read more.

There are many dashes in the third paragraph when he introduces what he hears and what he sees from the obscenities. He knows very well that the attackers know them and do it on purpose. The dashes can represent the feeling of excitement or tension when he is sure of something that once harms him. On the other hand, throughout the whole piece of work, punctuations mostly are period and comma, which can be explained because although the author shows some temper in the case, yet he cannot do anything to change the society, so that he feels not much emotion when describing the issue of their own bullied experience. It is all the matters of culture and religion. To conclude, the author uses imagery, diction, and punctuation to depict a story of a brother and a sister get scared by local children since the difference of culture. Under a theme of identity, the text shows some contrasts between youths and adults, as well as different culture's influence on people, while the Tanzania culture is exclusive on their own. ?? ?? ?? ?? ...read more.