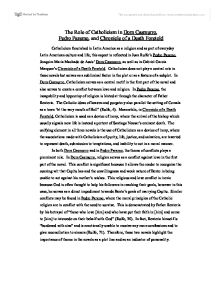 The Subliminal Role of the Church

The Role of Catholicism in Dom Casmurro, Pedro Paramo, and Chronicle of a Death Foretold Catholicism flourished in Latin America as a religion and as part of everyday Latin American culture and life; this aspect is reflected in Juan Rulfo's Pedro Paramo, Joaquim Maria Machado de Assis' Dom Casmurro, as well as in Gabriel Garcia Marquez's Chronicle of a Death Foretold. Catholicism does not play a central role in these novels but serves as a subliminal factor in the plot or as a feature of a subplot. In Dom Casmurro, Catholicism serves as a central motif in the first part of the novel and also serves to create a conflict between love and religion. In Pedro Paramo, the incapability and hypocrisy of religion is hinted at through the character of Father Renteria. The Catholic ideas of heaven and purgatory also parallel the setting of Comala as a town "at the very mouth of Hell" (Rulfo, 6). Meanwhile, in Chronicle of a Death Foretold, Catholicism is used as a device of irony, where the arrival of the bishop which usually signals new life is instead a portent of Santiago Nessar's eminent death. ...read more.

This is demonstrated by Father Renteria by his betrayal of "those who love [him] and who have put their faith in [him] and come to [him] to intercede on their behalf with God" (Rulfo, 30). In fact, Renteria himself is "burdened with sins" and is emotionally unable to receive any more confessions and to give reconciliation to sinners (Rulfo, 71). Therefore, these two novels highlight the importance of theme in the novels as a plot line and as an indicator of personality. As well, the idea of the Church's inability to intercede in manners of ethical violation is explored in the three novels. Firstly, in Marquez's novel, the inability of Father Carmen Amador to stop the murder of Santiago, despite his knowledge of the intended murder and status as a morally-esteemed member of society, directly reflects a criticism of the Church and its inabilities. This inability is also represented in Pedro Paramo in Father Renteria's inabilities to absolve people of their sin and host Gregorian masses for the dead, thus causing many of the inhabitants to wander as spirits throughout Comala (Rulfo, 31). ...read more.

Incidents, like that of Maria Dyada's who couldn't pay for a funeral for her sister, indicate the absence of justice (Rulfo, 31). Furthermore, the priest in Contla said that the situation in Comala is "God's will", and thus nothing can be done against it (Rulfo, 71). However, Comala is a city of death and dying, if this really is God's will, is God just, what did all of the inhabitants of Comala do to deserve such reprimands? In Dom Casmurro, Bentinho describes his life as an opera with Satan at the helms of the composition area and thus suggests that the chaos of Satan is reflected in his life and his journeys. This is correct because of the reflections to his conflict of the seminary and then later his conflict of adultery with Capitu. Therefore, divine justice is largely ignored in the three novels. As one may see, the role of Catholicism is large, yet hidden in the three Latin American novels discussed. Though the novels represent slightly different geological areas, and time periods, the novels are united by the theme of Catholicism with inverted principles that defy the fundamental beliefs of the Church. ...read more.