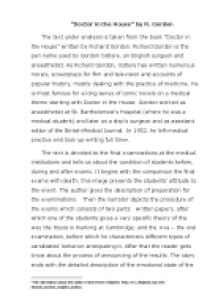 The text under analysis is taken from the book Doctor in the House written by Richard Gordon.

﻿?Doctor in the House? by R. Gordon The text under analysis is taken from the book ?Doctor in the House? written by Richard Gordon. Richard Gordon is the pen name used by Gordon Ostlere, an English surgeon and anaesthetist. As Richard Gordon, Ostlere has written numerous novels, screenplays for film and television and accounts of popular history, mostly dealing with the practice of medicine. He is most famous for a long series of comic novels on a medical theme starting with Doctor in the House. Gordon worked as anaesthetist at St. Bartholomew's Hospital (where he was a medical student) and later as a ship's surgeon and as assistant editor of the British Medical Journal. In 1952, he left medical practice and took up writing full time[1]. The text is devoted to the final examinations at the medical institutions and tells us about the condition of students before, during and after exams. It begins with the comparison the final exams with death; this image presents the students? attitude to the event. The author gives the description of preparation for the examinations. Then the narrator depicts the procedure of the exams which consists of two parts: written papers, after which one of the students gives a very specific theory of the way the tripos is marking at Cambridge; and the viva ? the oral examination, before which he characterizes different types of candidates? behavior anticipating it. ...read more.

A clock tingled?? The text is easily divided into complete parts. The exposition contains the general information about students? attitude to the final examinations and the way of preparation for this important event. The exposition begins with ?To a medical student the final examinations are something like death: an unpleasant inevitability to be faced sooner or later?? and ends with ?? and ran a final breathless sprint down the well-trodden paths of medicine.? The complication of the narration is showing the process of exam, candidates? excitement and suspense of the results. This part of the text stretches from ?The examination began with the written papers? to ??Number three oh six?? the Secretary whispered, without looking up from the book. ?R. Gordon?? ?Yes? I croaked.? The climax is the moment the highest intensity when the Secretary is pronouncing the narrator?s result and this very moment his fate is at stake. ?The world stood still. The traffic stopped, the plants ceased growing, men were paralysed, the clouds hung in the air, the winds dropped, the tides disappeared, the sun halted in the sky. "Pass," he muttered.? The denouement of the text is the untying of the knot of this story a kind of liberation and the ending of suffering. ?Blindly, like a man just hit by a blackjack, I stumbled up stairs.? Richard Gordon tries to convey hard emotional state of the medical students in his novel. ...read more.

A false answer, and the god's brow threatens like imminent thunderstorm.” At the end of this text our attention attracts repetition of sound [s] into the next paragraph:” The room had suddenly come to a frightening, unexpected silence and stillness, like an unexploded bomb. A clock tingled twelve in the distance. My palms were as wet as sponges. Someone coughed, and I expected the windows to rattle. With slow scraping feet that could be heard before they appeared the Secretary and the porters came solemnly down the stairs. The elder porter raised his voice.”. This alternation resembles a sound of burning fuse, a hissing snake, a mounting threat. The following short parallels constructions help to reflect the tense during anticipation of the narrator’s result: “The world stood still. The traffic stopped, the plants ceased growing, men were paralysed, the clouds hung in the air, the winds dropped, the tides disappeared, the sun halted in the sky.” Thanks to an interesting subject this story occupies the reader’s attention. It makes us to empathize with the students and feel their psychological state. But despite of numerous frightful similes we may see ironical slant of text which make it interesting to read. Having read only one fragment from the “Doctor in the house”, I found that Richard Gordon is a talented writer, who could perfect reflect the students’ emotion having avoided usage of widespread stamps and clichés. ________________ [1] The information about the author is taken from Wikipedia. http://en.wikipedia.org/wiki/Richard_Gordon_(English_author) ...read more.