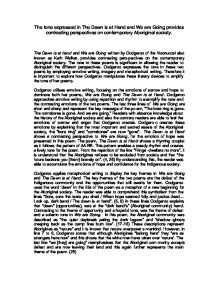 The tone expressed in The Dawn is at Hand and We are Going provides contrasting perspectives on contemporary Aboriginal society.

The tone expressed in The Dawn is at Hand and We are Going provides contrasting perspectives on contemporary Aboriginal society. The Dawn is at hand and We are Going written by Oodgeroo of the Noonuccal also known as Kath Walker, provides contrasting perspectives on the contemporary Aboriginal society. The tone in these poems is significant in allowing the reader to distinguish the different perspectives. Oodgeroo expresses the tone in these two poems by employing emotive writing, imagery and metaphorical writing. Therefore it is important to explore how Oodgeroo manipulates these literary devices to amplify the tone of her poems. Oodgeroo utilises emotive writing, focusing on the emotions of sorrow and hope to dominate both her poems, We are Going and The Dawn is at Hand. Oodgeroo approaches emotive writing by using repetition and rhythm to exemplify the tone and the contrasting emotions of the two poems. The last three lines of We are Going are short and sharp and represent the key message of the poem, "The bora ring is gone. The corroboree is gone. And we are going." ...read more.

Oodgeroo uses the word 'dawn' in the title of the poem as a metaphor of a new beginning for the Aboriginal society. The reader was able to comprehend this symbolism from the lines "Sore, sore the tears you shed / When hope seemed folly and justice dead... Look up, dark band / The dawn is at hand". (5, 8) In these lines Oodgeroo explains that "dawn" (opportunities), was at the "dark band's" (Aboriginal community) hand. Contrasting to the theme of opportunity and a hopeful tone, was the theme of defeat and a solemn tone in We are Going. In this poem, the Aboriginal community was described as "the quiet daybreak paling the dark lagoon" and "shadow-ghosts creeping back as the camp fires burn low". (17-18) These descriptions represent Aborigines as "nature" and it is known that nature overpowers mankind. However, in line 7 to 8, Oodgeroo states that although Aborigines "belong here" they "are as strangers here now" and this shows that the white men have taken over 'nature'. The last line "we [they] are going" reemphasises that the Aboriginal community accepts defeat and are now leaving their land and this again further represents the main theme of the poem. ...read more.

(17) This shows the union of the two cultures and shows the sense of "sharing the same equality". (21) The tone expressed in We are Going and The Dawn is at Hand, both written by Oodgeroo of the Noonuccal, provides the contrasting perspectives of the contemporary Aboriginal society. The Dawn is at Hand holds an optimistic tone throughout the poem and We are Going was set having a sorrowful tone. Oodgeroo metaphorically uses the word 'dawn' in The Dawn is at Hand to educate the indigenous people that it is a new beginning and that "the shame of the past is over at last" and "the ban and bias will soon be gone". (11, 25) Oodgeroo on the other hand uses imagery to emphasise the sorrow in We are Going. Oodgeroo describes the indigenous community as "gone and scattered" and this proves that the Indigenous community were heavily affected by the white society. (20) The tone in these poems was important in displaying to the reader the two perspectives - the sorrowful past of the Aborigines in We are Going and the optimistic future in The Dawn is at Hand where Oodgeroo states that hope and opportunities is still there awaiting the Indigenous people. ...read more.