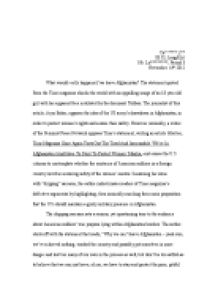 The US Withdrawal from Afghanistan. Time Article Analysis.

﻿Ya* **** L** IB SL Lang&Lit Mr. Lo********, Period 3 November 14th 2012 What would really happens if we leave Afghanistan? The statement quoted from the Time magazine shocks the world with an appalling image of an 18 year old girl with her apparent face mutilated by the dominant Taliban. The journalist of this article, Aryn Baker, opposes the idea of the US army?s drawdown in Afghanistan, in order to protect women?s rights and ensure their safety. However ironically, a writer of the Feminist Peace Network opposes Time?s statement, writing an article titled as Time Magazine Once Again Trots Out The Tired And Inexcusable ?We?re In Afghanistan (And Have To Stay) To Protect Women? Mantra, and causes the U.S citizens to contemplate whether the existence of American soldiers in a foreign country involves ensuring safety of the women? mantra. Seasoning her issue with ?dripping? sarcasm, the author indoctrinates readers of Time magazine?s defective arguments by highlighting, then ironically mocking their main proposition that the U.S should maintain a grisly military presence in Afghanistan. ...read more.

The tone somehow points the flaws written in the Time magazine article, where the readers cannot detect and correlations between women rights and the war, hence convincing the public that this article is not keen about real issues at hand. The author expresses her anger towards Time?s attempt to make an excuse of women as a reason for the soldiers in Afghanistan to stay through her diction and sentence style. After boldly stating that the American troops are not in Afghanistan for women issues, she asks the audience to ?Imagine instead of contributing to the violence in Afghanistan that further harms women? we were to actually help and give sustainable support and humanitarian aids to the Afghanistan people. She asks us to ?Imagine if we had taken the billions of ?reconstruction? funds that are unaccounted for in Iraq? and gave that money to organizations that passionately tries to get involved in rebuilding and strengthening the development of both countries. The word ?imagine?, which is defined as ?believe something unreal or untrue to exist or be so?, is frequently used when one thinks of a pleasant future or a happy outcome. ...read more.

She also subtly illustrates the audience that they are not an ?excuse?, hence saying that Time is treating women as if they are scapegoats to worlds? issues. The Feminist Peace Network creates a chain of flaws and illogical statements from the Time Magazine?s article of What Happens If We Leave Afghanistan by depicting the aftermath of the war at this present day, and also using resounding style of dictions, language, and other literary devices. The author explores what the real reason is behind the war in Afghanistan, and tackles the realistic views and purposes of the soldiers within that country. The true purpose of the soldiers staying in Afghanistan with their heads on the line, actually does vary among others; whether it is women rights, money, or moral ethics, everyone?s priorities are dissimilar. Nonetheless, as stated from the article, women should not be the excuse, reason, purpose or a scapegoat for militarism and war; they should be nothing but strong individuals just like others. ...read more.