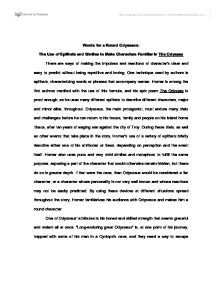 Words for a Round Odysseus: The Use of Epithets and Similes to Make Characters Familiar in The Odyssey There are ways of making the impulses and reactions of character's clear and easy to predict without being repetitive and boring. One technique used by authors is epithets, characterizing words or phrases that accompany names. Homer is among the first authors credited with the use of this formula, and his epic poem The Odyssey is proof enough, as he uses many different epithets to describe different characters, major and minor alike, throughout. Odysseus, the main protagonist, must endure many trials and challenges before he can return to his house, family and people on his island home Ithaca, after ten years of waging war against the city of Troy. During these trials, as well as other events that take place in the story, Homer's use of a variety of epithets briefly describe either one of his attributes or flaws, depending on perception and the event itself. Homer also uses puns and very vivid similes and metaphors to fulfill the same purpose, exposing a part of the character that would otherwise remain hidden, but these do so in greater depth. ...read more.

Another characteristic of Odysseus' personality is his ingrained rage and intensity. Early in the story, before Homer introduces the readers to "hotheaded Odysseus" (10.481), a friend of his, Menelaus, refers to Odysseus as the lion when he says, "but back the lion comes to his lair/ and the master deals both fawns a ghastly blood death," where the fawns are the suitors that plague his household and seek to marry Odysseus' wife (4.377-378). Odysseus' epithet and the metaphor both describe Odysseus as a person who is easily enraged. The metaphor enhances this and indicates that, once he allows himself to get angry, Odysseus loses control and cannot stop himself until he has taken his revenge for whatever blow he has been forced to receive, and this reflex is very similar to the instincts of lions. Odysseus is wild and an impressively skilled soldier and, when they are combined, they can cause very serious damage, hence Menelaus' prediction of the suitors brutal, messy deaths. Without this simile, it would have been much harder to understand some of Odysseus' actions later on in the story that are driven on by this rage. Towards the end of the story, Odysseus is found within the midst of all 109 of his wife's suitors' mutilated bodies and is described as "splattered with bloody filth like a lion that's devoured/ some ox" (22.427-428). ...read more.

Though this story is actually a discrete means of requesting a cloak, it is also the real Odysseus slyly inventing a story about his own cunning. Whether this is done subconsciously or not, it is irrelevant, because it does not take away the fact that Odysseus is so accustomed to having to make up stories that he even using this one. This story is a perfect method to make him more predictable because from now on it can safely be assumed that Odysseus will consider this form of deception the easiest way to achieve whatever it is he desires. Homer excelled all possible expectations concerning the use of language to increase the reader's understanding of his characters. Because of his repetitive use of literary devices like epithets, metaphors and similes, Odysseus seems very familiar and his decisions and reactions are easy to accept and understand. Had there been no use of these devices, Odysseus would have been a flat character, and it would have seemed too difficult to predict and understand any of his decisions or motives because there would not have been an intimate relationship between the readers and the character. The absence of these devices would have also diminished the effect of the story and would have decreased its quality and value. It would have lost its charm. Word Count: 1,269 ...read more.