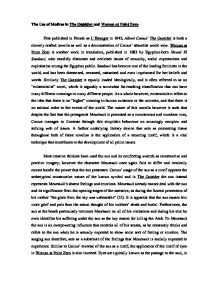 The Use of Motives in The Outsider and Woman at Point Zero First published in French as L'Etranger in 1942, Albert Camus' The Outsider is both a cleverly crafted novella as well as a demonstration of Camus' absurdist world view. Woman at Point Zero is another work in translation, published in 1983 by Egyptian-born Nawal El Saadawi, who candidly discusses and criticises issues of sexuality, social expectations and exploitation among the Egyptian public. Saadawi has become one of the leading feminists in the world, and has been threatened, censored, ostracised and even imprisoned for her beliefs and words. Similarly The Outsider is equally loaded ideologically, and is often referred to as an "existentialist" novel, which is arguably a somewhat far-reaching classification that can have many different meanings to many different people. As a whole however, existentialism refers to the idea that there is no "higher" meaning to human existence or the universe, and that there is no rational order to the events of the world. The nature of this novella however is such that despite the fact that the protagonist Meursault is presented as a monotonous and mundane man, Camus manages to illustrate through this simplistic behaviour an amazingly complex and striking web of issues. ...read more.

No light seemed ever to touch the eyes of this woman, even when the day was radiant and the sun at its very brightest." (18) The feeling of hostility that Firdaus receives from her mother is incredibly hyperbolic, to begin with she cannot even identify this woman as her mother and secondly the blackness of her mother's eyes is dark, brooding and illustrates the massive void within. Furthermore the crude contrast between the radiant sun and her dark eyes sees for an even darker image The shift of Firdaus' perception of her mothers eyes occurs right after she is genitally mutilated, posing as a huge critique of this social practice. When Meursault is at the beach with Raymond, the sun ultimately provokes Meursault to commit a crime. When he first sets out on his walk, "the sun was crashing down onto the sea and sand, and shattered into little pieces" (56) and subsequently right before he plants five bullets in the Arabs chest, "All [Meursault] could feel were the cymbals that the sun was clashing against [his] forehead and, indistinctly, the dazzling spear still leaping up off the knife in front of [him]." ...read more.

In Woman at Point Zero there is a prominent reference to eyes, which literally sheds new light for Firdaus. "I opened my eyes to find a woman seated next to me. She was wearing a green shawl, and her eyes were shadowed with green make-up. The black pupils in the centre of her eyes seemed to have turned green, a powerful dark green, like the trees on the bank of the Nile. The waters of the river reflected the green of the trees, and flowed by as green as her eyes" The hyperbolic descriptions of Sharifa's eyes, which for once seem different than all of the malicious eyes that she has thus far encountered. Firdaus searches for a motherly figure in Sharifa as she is comforted by the green in her eyes, which her mother never possessed. Firdaus however soon finds out that the green in Sharifa's eyes is instead artificial, nothing like the trees on the bank of the Nile and merely an optical trick by the green make-up and shawl that Sharifa wears. Even though we as the readers also believed that Sharifa was individual and unlike all the rest, her green eyes turn out to be jealous, manipulative and abusive and just like everyone else she befriends Firdaus only for personal benefit. ...read more.