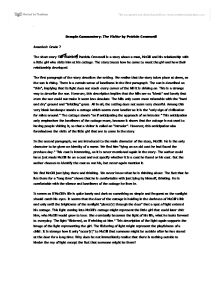 Sample Commentary: The Visitor by Patricia Cresswell Awarded: Grade 7 The short story The Visitor by Patricia Cresswell is a story about a man, McGill and his relationship with a little girl who visits him at his cottage. The story traces how he came to meet the girl and how their relationship developed. The first paragraph of the story describes the setting. We realise that the story takes place at dawn, as the sun is rising. There is a certain sense of loneliness in the first paragraph. The sun is described as "thin", implying that its light does not reach every corner of the hill it is shining on. This is a strange way to describe the sun. However, this description implies that the hills are so "bleak" and lonely that even the sun could not make it seem less desolate. The hills only seem more miserable with the "hard and dry" ground and "bristling" grass. All in all, the setting does not seem very cheerful. Among this very bleak landscape stands a cottage which seems even lonelier as it is the "only sign of civilisation for miles around." The cottage stands "as if anticipating the approach of an intruder." ...read more.

It is even more peculiar that she kisses McGill, a perfect stranger, before she leaves. However, there is no doubt that McGill receives comfort from her visits. There is a suggestion of something very soothing in the seventh paragraph where the author describes how the girl comes to visit McGill everyday. We can clearly feel the happiness McGill does when the girl visits him. The tone of the paragraph is very soft and gentle, as we see McGill grow more attached to the girl, coming to lover her. We can see how she is now an important part of his life as he "only lived to see her come again." She offers a companion in his life, when he is so isolated from the world, being miles away from everything. We do not know if McGill was ever married or ever had a child. If he was, then perhaps the little girl might remind him of something from his past, which would make her even dearer to him. We find something is wrong when one day, the girl stops coming. We feel McGill's anxiety and sadness as "many times" McGill opens his door and looks for her. ...read more.

Also, the story mainly made up of narrative prose, with one single line of speech from the girl, asking him if she may come in. After that, there is no dialogue whatsoever in the story. There might be implied speech in the last paragraph when McGill goes into the village, but what is said is never written out explicitly. This lack of dialogue, especially in the parts of the story describing the visits from the girl shows how there is a comforting silence between McGill and the girl. They do not come together for conversation, but for the little comfort of being together could bring. The Visitor explores the relationship between McGill and the girl, the relationship between McGill and the rest of the world, represented by the villagers. It shows the life of a man who have been so isolated from the rest of the world that he is a total stranger to its rules and etiquettes. While the readers enjoy the comfort of the relationship between McGill and the girl, we are also frustrated by the numerous questions about the identity of the girl and the ending the story. The sense of mystery envelops the story throughout as all through the story, there are so many questions left unanswered. ...read more.