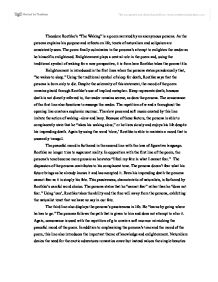 Theodore Roethke's "The Waking" is a poem narrated by an anonymous persona. As the persona explains his purpose and reflects on life, tenets of naturalism and solipsism are consistently seen. The poem finally culminates in the persona's attempt to enlighten the reader as he himself is enlightened. Enlightenment plays a central role in the poem and, using the traditional symbol of waking for a new perspective, it is from here Roethke takes the poems title. Enlightenment is introduced in the first lines when the persona states paradoxically that, "he wakes to sleep." Using the traditional symbol of sleep for death, Roethke says that the persona is born only to die. Despite the solemnity of this statement, the mood of the poem remains placid through Roethke's use of implied metaphor. Sleep represents death; because death is not directly referred to, the reader remains serene, as does the persona. The consonance of the first line also functions to assuage the reader. The repetition of w and s throughout the opening line creates a euphonic murmur. The slow pace and soft music created by this line imitate the action of waking -slow and hazy. Because of these factors, the persona is able to complacently state that he "takes his waking slow," or he lives slowly and enjoys his life despite his impending death. ...read more.

Along with this symbol comes an alternate interpretation of the line, "I wake to sleep." The waking becomes an enlightenment rather than an actual birth as it was in the first stanza. The sleep here may still refer to death, but it also may refer to the mental degeneration that old age brings, hence causing the persona to lose his enlightened state. Similarly, it takes the persona a long time to 'wake' as enlightenment comes with the maturity and wisdom age and experience bring. Next the focus turns from the persona to a friend, with the persona's question "which are you?" referring to the enlightened or the unenlightened and metaphorically dead. In the next line metaphor becomes reality as the persona states "God bless the Ground! I shall walk softly there." Using metonymy of ground for graves, Roethke has furthered the persona's complacency. He is at peace with his unalterable fate which will ultimately kill him, and he shows this by blessing the ground. By "walking softly there," the persona will not fight his fate, but instead will accept it graciously. The repetition of the letter s in this line, along with the other mention of 'softly' creates a serene mood. ...read more.

This is distressing, yet it assures the persona at the same time. By accepting this fact, he is able to live his life. He knows that "What falls is always. And is near," or that death is consistently present, but this knowledge allows him to continue living his life. "The Waking" is structured as a villanelle, which repeats the first and third lines of the poem three times each1. In the waking, they are alternately repeated twice and then form a final couplet at the end of the poem. This, along with the rhyme scheme in which the second and third lines of each stanza always rhyme, function to show the interconnectedness of life or enlightenment and death in the poem. The continuous repetition of the lines "I learn by going where I have to go," and "I wake to sleep, and take my waking slow," emphasizes the inability to alter fate and the persona's acceptance of this fact. "The Waking" is a poem in which the persona reflects on life. He believes that knowledge comes from experience. He holds the solipsistic view that personal emotions are the only truth. His real "waking" comes from knowing, however, that he is not the captain of his fate or the master of his soul; he will die and nothing he will do can change that fact. From this comes his enlightenment. 1 http://en.wikipedia.org/wiki/Villanelle ?? ?? ?? ?? Kate O'Brien 2 ...read more.