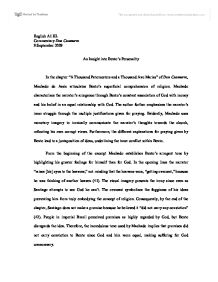 English A1 HL Commentary Don Casmurro 8 September 2009 An Insight into Bento's Personality In the chapter "A Thousand Paternosters and a Thousand Ave Marias" of Don Casmurro, Machado de Assis articulates Bento's superficial comprehension of religion. Machado characterizes the narrator's arrogance through Bento's constant association of God with money and his belief in an equal relationship with God. The author further emphasizes the narrator's inner struggle through the multiple justifications given for praying. Evidently, Machado uses monetary imagery to ironically communicate the narrator's thoughts towards the church, reflecting his own corrupt views. Furthermore, the different explanations for praying given by Bento lead to a juxtaposition of ideas, underlining the inner conflict within Bento. ...read more.

As Bento attempts to negotiate with God, the monetary metaphor develops portraying the narrator's corrupt views of religion. Bento readily tells the reader he "was loaded down with unfulfilled promises." Consequently, he explains that "bribing the divine will by the number of prayers," was his way of getting things done (41). The diction employed "loaded," and "bribing," all evoke a monetary image. The image creates the metaphor, which suggests that Bento regarded God to be as susceptible as humans to bribery. Thus, through the metaphor Machado establishes that Bento's own corrupt self, ends up leading him to also see corruption in other places. Machado further expands the metaphor when Bento claims that "could find no other currency," to communicate with God (42). ...read more.

The chapter is organized into five paragraphs, of which the longest two are the narrator's thoughts. In the first long paragraph Bento expresses the idea that he would eventually forget his prayers. However, in the subsequence long paragraph, Machado juxtaposes the idea with Bento affirming his inability to forget the prayers. The different ideas within the paragraph symbolize the inner conflict, which the narrator goes through in the novel. Through the chapter "A Thousand Paternosters and a Thousand Ave Marias," Machado de Assis expresses his criticism towards a superficial understanding of religion. Bentinho's arrogance drives him to view religion as a business driven by money and missing the concept of religious devotion. Therefore, Machado uses religion to demonstrate that misinterpretations watered by the narrator's corrupt views form the roots of Bento's contradictory arguments, which ultimately braches off into the inner conflict within Bentinho. Word Count: 642 3 ...read more.