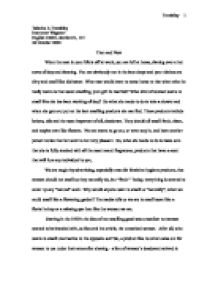 Then and Now When the man in your life is off at work, you are left at home, slaving over a hot stove all day and cleaning.

When the man in your life is off at work, you are left at home, slaving over a hot stove all day and cleaning. You are obviously not in the best shape and your clothes are dirty and smell like dishwater. What man would want to come home to that when what he really wants is that sweet smelling, pure girl he married? What kind of woman wants to smell like she has been working all day?  So what she needs to do is take a shower and when she gets out put on the best smelling products she can find. These products include lotions, oils and the most important of all, deodorant. They should all smell fresh, clean, and maybe even like flowers.  No one wants to go out, or even stay in, and have another person notice that her scent is not very pleasant.  So, what she needs to do is make sure that she is fully stocked with all the most recent fragrances, products that have a scent that will lure any individual to you.

We are taught by advertising, especially ones for feminine hygiene products, that women should not smell as they naturally do, but “fresh.” Today, everything is scented to cover up any “natural” scent. Why would anyone want to smell us “naturally”, when we could smell like a flowering garden? The media tells us we are to smell more like a florist’s shop or a calming spa than like the women we are.

Starting in the 1950’s the idea of not smelling good was a moniker no woman wanted to be branded with, as featured the article, the unmarked woman.  After all, who wants to smell unattractive to the opposite sex? So, a product like no other came out for women to use under their arms after shaving - a line of women’s deodorant arrived in stores.  In the 1950’s the typical woman was a stay at home mom, but that did not stop her from sweating and not smelling like a “delicate flower”, especially due to the fact that she was not only cleaning up the entire house on her own, but also cooking and preparing for her “beloved” to return home.

Deodorant advertising today has changed a great deal since its introduction in the 1950’s.  While it was an aberration to see a naked woman hocking personal hygiene products at the time, today it is considered the norm. The original article that I found showed a picture of a woman who appeared to be in the shower naked, holding her breast, revealing a smooth underarm. When women view something like that it might give them the impression that if they were to use this product that they would feel free, weightless, or in control with nothing holding them back.  It was quite unusual to see something so sexual in nature and openly explicit in magazines back then, so it really caught my eye - it stood out in a way that the same article today would not. Other advertisements that I found from the 1950’s, for personal hygiene, were for men. Old Spice, for instance was said to be a scent women would never forget.

I found articles today to be more frequently sexual. Once in awhile you would see some nudity in the fifties, but it was nowhere near as common as it is today; for example, while paging through periodicals I found myself becoming numb to the overt sexuality.  When consumers view these articles in today’s age it’s almost as if they pay no mind to the undeniable sexuality shown as opposed to fifty-some years ago when it was unheard of for a woman to appear half-naked in public.

Interestingly, in the articles that I found from more recent times, women seem m to be selling their bodies more than the product. In approximately the mid 70’s, priorities changed. The idea changed from a woman wanting to be simply “fresh and clean smelling” to being objects of direct desire and seduction. For example, in the Soft and Dry advertisement, I feel that the woman is the most important thing in the advertisement, but her sexuality plays a close second. The woman in the advertisement is wearing a revealing dress, with an aggressive look on her face, standing in front of a “masculine” motorcycle. Obviously, from her pose and expression, she is the one in control; am I supposed to conclude that if I were to use this product I will be like her – sexy, in control, and in charge of theoretically masculine objects? The urge to be desirable drives product sales today. It’s become the new way to fit in and “keep up with the Jones’”.

Sexuality is vastly different from the way it was in the 1950’s.  Women today are still being stereotyped and misrepresented, while men do the same things and yet, they seem to be held to a different standard.  In one of the other advertisements I found, there was a man reaching for a bowling ball, and in the background there was a camouflaged naked woman with two bowling balls symbolized as her butt cheeks.  Behavior like this is applauded by men and is established as a joke or as being masculine.  Women could never get away with something of that nature without being labeled a tramp.  However, when a woman is trying to promote a product it seems to me as though they are trying to appeal more to men. A woman on the cover of magazines wearing practically nothing and promoting something like deodorant is really not appealing to me. Women are repeatedly told they are to smell fresh, clean, and sweet; just how a man wants them to be; whereas men are to smell masculine and to impress their friends.  If I were to go out and buy deodorant it would be because it worked not because if I wore it I would suddenly become gorgeous and sexy like the women on the advertisements.  I must be in the minority in my beliefs though.  It seems more and more women are only buying certain products because it will make them more appealing to men.  Nearly every female sex symbol today has their own perfume.  It’s not enough that we need to look like Jennifer Lopez, but we need to smell like her also.