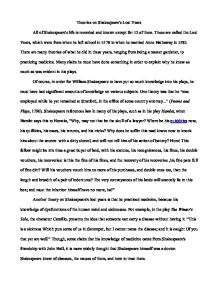 Theories on Shakespeare's Lost Years All of Shakespeare's life is recorded and known except for 12 of them. These are called the Lost Years, which were from when he left school in 1578 to when he married Anne Hathaway in 1582. There are many theories of what he did in these years, ranging from being a master gardener, to practicing medicine. Many claim he must have done something in order to explain why he knew as much as was evident in his plays. Of course, in order for William Shakespeare to have put so much knowledge into his plays, he must have had significant amounts of knowledge on various subjects. ...read more.

Where be his quiddities now, his quillities, his cases, his tenures, and his tricks? Why does he suffer this mad knave now to knock him about the sconce with a dirty shovel, and will not tell him of his action of battery? Hum! This fellow might be in's time a great buyer of land, with his statutes, his recognizances, his fines, his double vouchers, his recoveries: is this the fine of his fines, and the recovery of his recoveries ,his fine pate full of fine dirt? Will his vouchers vouch him no more of his purchases, and double ones too, than the length and breadth of a pair of indentures? ...read more.

"This is a sickness Which puts some of us in distemper, but I cannot name the disease; and it is caught Of you that yet are well." Though, some claim that his knowledge of medicine came from Shakespeare's friendship with John Hall, it is more widely thought that Shakespeare himself was a doctor. Shakespeare knew of diseases, the causes of them, and how to treat them. Although there are many theories on what Shakespeare did in those twelve years, there is no way to truly know what happened. Perhaps he read about all of these things. Perhaps he befriended many who had knowledge in different areas. Perhaps even, he asked for help from others who knew of such things and they wrote parts of his plays, but who knows? ...read more.