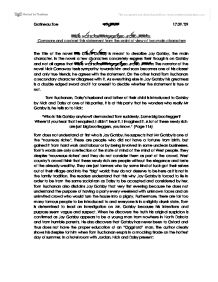 There was something gorgeous about Gatsby. Compare and contrast the statement from two characters point of view.

There was something gorgeous about him. Compare and contrast this statement from the point of view of two main characters The title of the novel The Great Gatsby is meant to describe Jay Gatsby, the main character. In the novel a few characters concretely express their thoughts on Gatsby and not all agree that there was something gorgeous about him. The narrator of the novel Nick Carraway feels sympathy towards him and soon becomes one of his closest and only true friends, he agrees with the statement. On the other hand Tom Buchanan a secondary character disagrees with it. As everything else in Jay Gatsby his greatness is a double edged sword and it for oneself to decide whether the statement is true or not. Tom Buchanan, Daisy's husband and father of their child is introduced to Gatsby by Nick and Daisy at one of his parties. It is at this party that he wonders who really Mr Gatsby is, he tells so to Nick: "Who is this Gatsby anyhow? demanded Tom suddenly. Some big bootlegger? Where'd you hear that I enquired. ...read more.

The author clearly shows his despise for him when Tom Buchanan erupts in a mocking tirade on the hottest day of summer, in a hotel room with Jordan, Nick and Daisy present: "Self-control! repeated Tom incredulously. "I suppose the latest thing is to sit back and watch Mr Nobody from Nowhere to make love to your wife. Well if that's the idea you can count me out..." (page 137) Although it is not specified in the text the readers can guess in what tone these words are shouted, in a tone of contempt and almost of disgustingness. Tom does not find anything gorgeous about Jay Gatsby when the accident happens he almost goes to the point of insulting him of coward because he did not stop to enquire what had happened. In summary Tom despises Jay Gatsby because he is a nouveau riche that lied about his background so he could steal his wife. He does not have any sane occupation and he is a self made man with deal in unclean businesses. Nick's view is completely different from Tom's. From the beginning there is something about Gatsby to which he is attracted by. He says "I could see nothing sinister about him." ...read more.

Gatsby believes so much in his dream that he even believes he can repeat the past: "You can't repeat the past? He cried incredulously. Why of course you can!" (page 116) And another important fact was that although Gatsby was corrupted and dealt with strange people he was honest. He was not like Tom and Daisy, he was not careless of consequences. Throughout the novel only a few characters express what they feel towards Gatsby amongst them, Jordan and Daisy. The author leaves it up to the reader to decide if after all his corruption and his flaws Gatsby was great or not. However, it is important to keep in mind that this novel is set back in the 1920's and that the times were really very different. The social ranks and beliefs of one another were much more important than nowadays. In my personal opinion I do think that there was something gorgeous about Gatsby. He had a dream and a purpose, he did everything he could to achieve this but failed to realize that because of different conditions it was impossible for him to seize it. He came from so far for nothing but his personal qualities and especially his determination and honesty make him a "gorgeous" but fool man. ?? ?? ?? ?? Gatineau Zoe English 17.09.'09 ...read more.