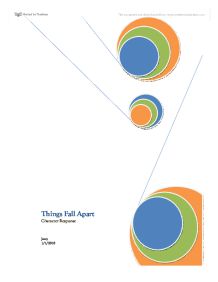 Things Fall Apart Character Response Jerry 1/1/2010 Nigeria, an African country of a befuddling history, is the chosen setting for Chinua Achebe's Things Fall Apart. In the midst of the novel, readers find themselves audiences for a story of cultural collision. Many characters recoiled in sheer disgust and fright at the sudden outburst of British rule, while others embraced it wholeheartedly, yearning for release from their own ridiculous traditions. Achebe has outshone himself by establishing the proper sense of cultural rejection and one of appreciation, through the palpable description of numerous character personalities. In the far off village of Umoufia, lived a man of past grievances, a man of massive build and an insatiable hunger for revenge. This man was familiarly known as Okonkwo, the village's most horrid and terrible chap, haunted by the ghost of his past. His father, Unoka, had paved a way of shame and poverty for his son, which Okonkwo never ceased to attempt to erase. Caught in his most unnatural fascination, Okonkwo refused to accept the presence of foreigners in his land. ...read more.

"He has put a knife on things that held us together ... and we have fallen apart" Okonkwo viewed the entire separation of a once close clan with utter resentment, and befouled the name of the foreigners. Though it was impeccably clear that none of the Umoufians were willing to rush into a war of blame, Okonkwo was nevertheless determined to cause some sort of disturbance. His body was found suspended in midair by a hanging-rope, after he had so mercilessly killed a court messenger. This harsh and irrevocable means of trying seamlessly to oppose an occurring change, was not shared by all of Okonkwo's fellow villagers. Quite the contrary, many were more than happy to welcome the foreigners with open arms and a desire to flee the suffocating, governing rule of Umoufia. "There were many men and women in Umofia who did not feel as strongly as Okonkwo". Instead of arming themselves against the much needed development, they simply watched markets quickly rise into becoming major trading business. ...read more.

Obierika honestly endeavoured to try and find the answers "But although he thought for a long time he found no answer. He was merely led into greater complexities". Consequently, he preferred the explained regulations of the Christian religion, much like that of Nwoye. Okonkwo's response was of an extreme, he stood resolutely near all that of which his life was based upon and refused to even slightly budge. Nwoye, however, bounded off to the other side, never looking back toward what he had so willingly left behind. Obierika flows into the very middle of both: he was most unquestionably conscious of what the foreigners were doing, which was slowly reverting the Nigerians onto the Christian side, but he was not completely opposing this change, knowing that it might cause a bit of prosperity to flourish and perhaps a small spread of knowledge among the Umoufians. Chinua Achebe was definitely successful in showing all those contrasting responses, starting with the extremes then gradually showing what should be in the very middle. Things Fall Apart is an aspiring novel, written only to show how even the tightest of clans and bonds may eventually unfurl and separate, merging into that of the worldly norm. ...read more.