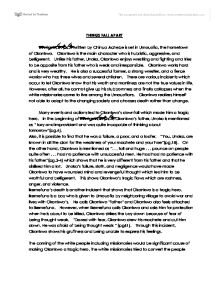 THINGS FALL APART Things Fall Apart written by Chinua Achebe is set in Umouofia, the hometown of Okonkwo. Okonkwo is the main character who is hubristic, aggressive, and belligerent. Unlike his father, Unoka, Okonkwo enjoys wrestling and fighting and tries to be opposite from his father who is weak and irresponsible. Okonkwo works hard and is very wealthy. He is also a successful farmer, a strong wrestler, and a fierce warrior who has three wives and several children. There are various incidents which occur to let Okonkwo know that his wrath and manliness are not the true values in life. However, after all, he cannot give up his stubbornness and finally collapses when the white missionaries come to live among the Umouofians. ...read more.

. . pounce on people quite often . . . had no patience with unsuccessful men. He had had no patience with his father"(pg.3-4) which shows that he is very different from his father and that he disliked him a lot. Unoka's failure, sloth, and negligence would have made Okonkwo to have wounded mind and revengeful thought which led him to be wrathful and belligerent. This shows Okonkwo's tragic flaws which are rashness, anger, and violence. Ikemefuna's death is another incident that shows that Okonkwo is a tragic hero. Ikemefuna is a boy who is given to Umouofia by neighboring village to avoid war and lives with Okonkwo's. ...read more.

Brown who was one of the white missionaries. When Okonkwo returns, he sees the big change in Umouofia and realizes that he is not very welcomed. Realizing the crisis of falling apart of Umouofia, he strives to maintain the tradition, culture, and custom. However, he soon finds himself unable to adapt to changing society and that he became a relic; his values were no more considered important. After all, realizing his tragic flaws, he chooses to die. It is clear that the main character, Okonkwo, is a tragic hero in Things Fall Apart. He had tragic flaws: rashness, anger, and violence. Okonkwo was not able to express his feelings and afraid of being shown weak. Also, he was hubristic in traditions and finally realized his flaws and dies. ...read more.