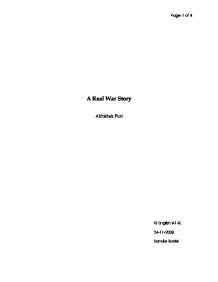 A Real War Story Abhishek Puri IB English A1-SL 24-11-2008 Sandie Bartel Tim O'Brien is successful in bringing authenticity in his novel, "The Things They Carried" by blurring the distinction between fact and fiction. O'Brien fabricates numerous details of the Vietnam War, (including the various characters in alpha-company) which compliment a spectrum of emotions brought about by the complexity of the mechanisms of the war. The author uses various points of view to give the reader a wide range of perspectives so that people bring their own personality and lay it on the truth. O'Brien's intention of telling a "real war story" has been achieved by using the "real" as a point of departure for his storytelling as he correctly believes that his imagined accounts could have genuine roots of truth. In the chapter, "How to tell a true war story", O'Brien tells various versions of Curt Lemon's death. However he states that, "It comes down to gut instinct. A true war story, if truly told, makes the stomach believe", O'Brien's gut feeling and the actual event of how Lemon died is told following this statement. ...read more.

Here, O'Brien tries to express that Truth resides in fiction, not in fact which is a major theme of the novel, re-emphasizing his numerous justifications in "How to Tell a True war story". Very concise chapters like "Stockings" and "The Dentist" are short stories which make a microcosm into a microcosm where each large effect of the Vietnam War on American soldiers is told in one effective story, which greatly contributes to the realism to the story by giving the reader a wider angle of the war's effects on American men. Even though the author refers to another "Tim O'Brien" in "The Things They Carried" and characters of the alpha company don't exist Credibility of the story is achieved by telling the story from different points of view. The first person major used in 'On the Rainy River' makes the story very intimate and therefore believable. He starts off by saying: "This is one story I've never told before" immediately the reader is engaged. It is as if Tim O'Brien were an old friend, who told the reader a secret nobody knows of. ...read more.

Colloquial language is another form of detail to make the stories more truthful. The use of words like "dust-off chopper", which would be used in regular speech by the soldiers, the swearing also adds to the believability of the story. Everything seems possible. If the soldiers would use words like, the army truck that comes to pick up the casualties instead of the 'dust-off chopper' it would not be as truthful. "To carry something was to hump it" the word hump is then always used instead of carrying. The use of military slang adds to the truth; it makes the reader feel as if he were part of it, as if he knew everything the soldiers did. Even though the author refers to another "Tim O'Brien" in "The Things They Carried" and characters of the alpha company don't exist, By repeating the same story with different details, and different points of views and by adding detail and colloquial language, Tim O'Brien successfully wrote and intimate war story. This story could be true, although the characters and details are fictional. The feelings evoked by each story are true, and similar to the ones he himself felt while he was in Vietnam fighting the war. ?? ?? ?? ?? Page 1 of 3 ...read more.