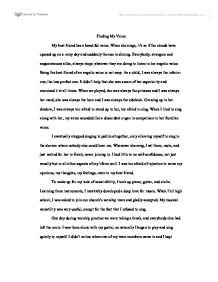 I had little to no self-confidence, not just vocally but in all other aspects of my life as well. I was too afraid of rejection to voice my opinions, my thoughts, my feelings, even to my best friend. To make up for my lack of vocal ability, I took up piano, guitar, and violin. Learning three instruments, I inevitably developed a deep love for music. When I hit high school, I was asked to join our church's worship team and gladly accepted. My musical versatility was very useful, except for the fact that I refused to sing. One day during worship practice we were taking a break, and everybody else had left the room. ...read more.

A bit confused, I bashfully thanked him and wondered if he was being sincere or not. When everybody else came back, he insisted that I sing for the rest of the team. They all agreed with his assertions as well. I reluctantly began singing for worship, still believing that my voice was subpar. After a few months of exposure, I slowly began to gain confidence in both my voice and myself. I started to sing in public again, although it could have been either because I was more confident in myself or just didn't care about what others thought anymore. When others tell me that I have a beautiful voice and that they wish that they could sing, I reassure them and tell them, don't worry, I believe everybody can sing. ?? ?? ?? ?? ...read more.