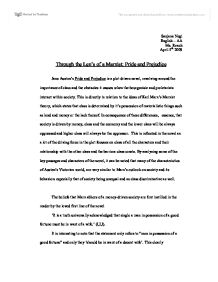 Through the Len(TM)s of a Marxist: Pride and Prejudice

Sanjana Negi English - AA Ms. Roach April 5th 2009 Through the Len's of a Marxist: Pride and Prejudice Jane Austen's Pride and Prejudice is a plot driven novel, revolving around the importance of class and the obstacles it causes when the bourgeoisie and proletariats interact within society. This is directly in relation to the ideas of Karl Marx's Marxist theory, which states that class is determined by it's possession of materialistic things such as land and money or the lack thereof. In consequence of these differences, essence, that society is driven by money, class and the economy and the lower class will be always oppressed and higher class will always be the oppressor. This is reflected in the novel as a lot of the driving force in the plot focuses on class of all the characters and their relationship with the other class and the barriers class create. By analyzing some of the key passages and characters of the novel, it can be noted that many of the characteristics of Austen's Victorian world, are very similar to Marx's outlook on society and its behaviors especially that of society being unequal and as class discriminative as well. The beliefs that Marx abhors of a money-driven society are first instilled in the reader by the loved first line of the novel 'It is a truth universally acknowledged that single a man in possession of a good fortune must be in want of a wife.' ...read more.

Bennett attempts to best of her abilities for the union of Jane Bennett (her eldest daughter) and Mr. Bingley and when Mr. Bingley is swayed by the pressures of society to marry a woman of his distinction, she is helpless to watch the future she worked so hard to achieve for Jane break under societal demands. Despite, initially repressing this pain into nonchalance, it is obvious that she is extremely happy when Mr. Bingley returns. Clearly, Mrs. Bennett understands the class distinction between Mr. Bingley and her family, but she understands that the differences have existed for too long to be ignored as the bourgeois truly was the dictator and the proletariat (like her and her family) would always be affected by any decisions that the , which relates to Marx's belief of the immense history behind this inequality. With the upper class having so much power over the middle class amongst other obvious distinctions, Austen's class conscious Victorian world depicts the bourgeoisie as a pedestal all that the proletariat are unable to reach despite tremendous efforts. Mr. Collins is one of the characters who show this utmost need for being accepted by the bourgeoisie and represents the helplessness of the oppressed by his pathetic attempts of reaching the upper status. Mr. Collins is first introduced as a distant cousin of the Bennett sisters who comes to visit the family. ...read more.

She considers herself superior to the middle class, and makes her notions of the distinction and her authority - as noted through the conversation. She is quick to insult Elizabeth and her family at an opportunity - whether it is the way Elizabeth dresses or her family's jovial attitude. Miss. Bingley, like most bourgeois considers class to be an important aspect to any person. Proud of her higher class, she believes that her class need only mingle amongst themselves and that any person of a lower background was an added annoyance. Miss. Bingley can be seen as a character representation of the society that Marxism criticizes, as she is very class- conscious and represents the inequality as often she is one inflicting it upon others. The constant comparison between the two classes and the attempts to undermine the other can be explained by Marx's quote "Historical changes in the fundamental mode of material production effect changes in the class structure of a society, establishing in each era dominant and subordinate classes that engage in a struggle for economic, political, and social advantage." Class distinction and its consequences are the pushing factors of all the problems in the novel as they all created by the single belief of superiority and authority that the bourgeois class believes it has over the proletariats. ?? ?? ?? ?? Page 6 of 6 Sanjana Negi ...read more.