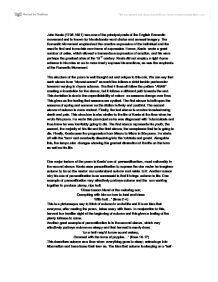 John Keats (1795-1821) was one of the principal poets of the English Romantic movement and is known for his elaborate word choice and sensual imagery. The Romantic Movement emphasized the creative expression of the individual and the need to find and formulate new forms of expression. Hence, Keats wrote a great number of odes, which allowed a tremendous expression of emotion, and his were perhaps the greatest odes of the 19th century. Keats did not employ a rigid rhyme scheme in his odes so as to more freely express his emotions, as was the emphasis of the Romantic Movement. The structure of the poem is well thought out and unique to this ode. We can say that each stanza is an "almost sonnet" as each line follows a strict iambic pentameter however varying in rhyme scheme. The first 4 lines all follow the pattern "ABAB" creating a foundation for the stanza, but it follows a different path towards the end. This deviation is due to the unpredictability of nature as seasons change over time. This gives us the feeling that seasons are cyclical. The first stanza is built upon the seasons of spring and summer as the diction is lively and youthful. The second stanza of autumn is more content. Finally, the last stanza is sombre foreshadowing death and pain. This structure is also similar to the life of Keats at the time when he wrote this poem. ...read more.

(lines 21-22) This idea suggests that autumn is quietening down, getting ready for winter and the last harvests are coming through. Also the word "oozing" implies a certain sluggish nature where things are tiring and withering. Keats uses a great deal of imagery throughout the poem prompting the reader to envisage autumn and how they feel about it. One of the beginning images of the poem is of the 'maturing sun'. This creates the idea that autumn is when the sun is growing old after the summer and it is getting lower in the sky and growing golden. It is a sight that is a characteristic of the beginning of autumn and creates a good start to the poem and the feeling of the fruitfulness to come. Also in the first stanza, Keats depicts vines running around the roof: 'vines that round the thatch-eaves run...' (line 4) This effectively depicts autumn being busy preparing the last-minute fruit and plumping the vegetables. This is a beautiful way to imagine autumn and is a characteristic of late autumn in our minds. It is also a symbol for the youth of autumn. One of the final images of the poem is of the 'small gnats mourn' (line 27). This creates an image of the gnats, swiftly flying around, buzzing sadly. In late autumn you often find gnats and as Keats depicts them as mourning, it gives a feeling that autumn is over and winter is arriving. ...read more.