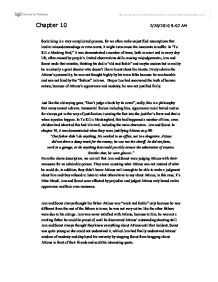 To Kill a Mocking Bird

Socialising is a very complicated process, for we often make unjustified assumptions that lead to misunderstandings or even worst, it might even cause the innocents to suffer. In "To Kill a Mocking Bird," it was demonstrated a number of times, both in court and in every day life, often caused by people's limited observations skills causing misjudgements; Jem and Scout made that mistake, thinking his dad is "old and feeble" and maybe useless but in reality he is actually a great shooter who doesn't like to boast about his talents. I truly admire the Atticus's personality, he was not thought highly by his town folks because he was humble and was not bind by the "fashion" in town. Harper Lee had uncovered the truth of human nature; because of Atticus's appearance and modesty, he was not justified fairly. Just like the old saying goes, "Don't judge a book by its cover", sadly, this is a philosophy that many cannot achieve. ...read more.

Jem and Scout were affected by prejudice and judged Atticus only based on his appearance and their own measures. Jem and Scout always thought his father-Atticus was "weak and feeble" only because he was different from the rest of the fathers in town; he was not very active like the other fathers were due to his old age. Jem was never satisfied with Atticus, because to him, he was not a exciting father he could be proud of, until he discovered Atticus' outstanding shooting skill. Jem and Scout always thought they knew everything about Atticus until that incident, Scout was quite young so she could not understand it, whiled Jem had finally understand Atticus' wisdom of modesty and displayed his maturity by stopping Scout from bragging about Atticus in front of their friends and said this interesting quote. "Atticus is a gentleman, just like me." (Chapter 10 p.109) Jem and Scout was always disappointed their father because Atticus is different from the others but his opinion for him had gradually changed as he matured, and as it did, he finally came to an understanding of the real values a gentleman should posses. ...read more.

'Hush, Heck,' said Atticus.'" Atticus even stopped others from praising him, plus he still chose to keep his principles after he just prevented his neighbors from being attacked by a mad dog. Atticus was a great model for Jem and he greatly contributed to Jem's grown in maturity. "To Kill a Mockingbird" had a timeless topic; similar versions of this story had appeared again and again in human history, where innocents almost always suffer. Harper Lee had exposed the ugly truth of human nature and the fact that injustice exists in this society often caused by some people's ignorance or selfishness. Jem and Scout started of misjudging Atticus and fortunately, it was all cleared up after the incident with Jem finally understood the values of a gentleman. Jem and Scout were lucky to have Atticus as a father, he was a great educator and he tried his hardest to make sure they are safe, safe from the weaknesses in human nature. To Kill a Mockingbird was a well-written narrative; it flawlessly uncovered a variety of human nature- the finest of humanity as well as ugly human natures. Chapter 10 26/02/10 9:02 AM ...read more.