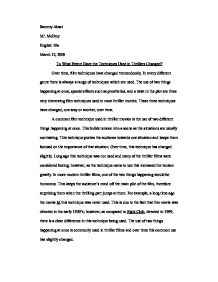 To What Extent Have the Techniques Used in Thrillers Changed?

Rammy Abssi Mr. McIlroy English 10a March 12, 2008 To What Extent Have the Techniques Used in Thrillers Changed? Over time, film techniques have changed tremendously. In every different genre there is always a range of techniques which are used. The use of two things happening at once, special effects such as prosthetics, and a twist in the plot are three very interesting film techniques used in most thriller movies. These three techniques have changed, one way or another, over time. A common film technique used in thriller movies is the use of two different things happening at once. This builds tension into a scene as the situations are usually contrasting. This technique pushes the audience towards one situation and keeps them focused on the importance of that situation. ...read more.

In the movie Saboteur, directed in 1942, the antagonist is about to die and the audience is convinced that he will be killed; however, there is a complete twist and immediately the protagonist, main character, is killed. Looking at this example, there is an obvious twist in the plot even though this movie was directed a long time ago. All in all, this film technique, the twist in the plot, has been used for a long time and is still used in almost all modern and successful thriller movies. Overall, there is a range of film techniques used in thriller films. The use of two things happening at once, special effects including prosthetics, and the twist in the plot are three examples of film techniques used in thriller films. Overtime, each one of these techniques has changed differently. Word Count: 741 ?? ?? ?? ?? ...read more.