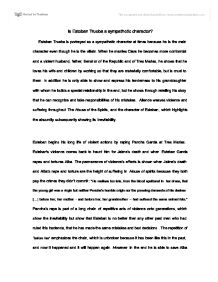 To what extent is Esteban Trueba a sympathetic character in 'house of spirits'?

Is Esteban Trueba a sympathetic character? Esteban Trueba is portrayed as a sympathetic character at times because he is the main character even though he is the villain. When he marries Clara he becomes more conformist and a violent husband, father, Senator of the Republic and of Tres Marias, he shows that he loves his wife and children by working so that they are materially comfortable, but is cruel to them. In addition he is only able to show and express his tenderness to his granddaughter with whom he builds a special relationship in the end, but he shows through retelling his story that he can recognize and take responsibilities of his mistakes. Allende weaves violence and suffering throughout The House of the Spirits, and the character of Esteban, which highlights the absurdity subsequently showing its inevitability. Esteban begins his long life of violent actions by raping Pancha Garcia at Tres Marias. Esteban's violence comes back to haunt him for Jaime's death and when Esteban Garcia rapes and tortures Alba. ...read more.

On the other hand his casual kindness to Transito brings an unforeseen good; Esteban has a special relationship with his granddaughter, Alba because it seems that it is only with Alba that he can express some kind of tenderness, and only she is able to somehow control him with the help of Clara's writing. "She heard Miguel's name but did not [...] they beat her, manhandled her, pulled off her blouse, and she could no longer think, could only say no, no, and no and calculate how much longer she could resist before her strength gave out, not knowing this was only the beginning, until she felt herself begin to faint and the men left her alone, lying on the floor, for what seemed to her a very short time. " This passage shows the disorientation of Alba, her exhaustions through the pace of the phrase, but especially the torture that she is experiencing from the people which seems to go on for a long time, then stop, but only 'a very short time' that fits with the pace ...read more.

The verbs used are so cold and violent to describe his cruel act towards a person who loved him, show the sadness of this character, who keeps getting worse by destroying himself, which could be interpreted as reasons why he might be a sympathetic character. Due to all those negative actions Esteban continually proves to be a bad person making it very hard to relate to him rather than to all those other characters, which he hurts. He controls the destinies of peasant women who live on his land and women of his own class, including those in his family. The rape of Pancha illustrates his position of ownership and control. He is the main character with Alba, which makes it hard to decide for sure whether or not he is sympathized with, but in a way she shows that now he is able to tell the story as it was and not change it, showing that he doesn't just care about his image, but on the contrary he did all those horrible things, which made it really easy for the readers to sympathize with other characters which he was hurting. ...read more.