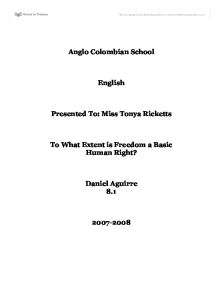 To What Extent is Freedom a Basic Human Right?

Anglo Colombian School English Presented To: Miss Tonya Ricketts To What Extent is Freedom a Basic Human Right? Daniel Aguirre 8.1 2007-2008 To What Extent is Freedom a Basic Human Right? We all talk about freedom but do we really know what it means? Well, freedom is doing what you want but always having some limits, also it is freedom from entrapment like from a prison or something similar. There are several types of freedom, like religious freedom that is freedom of belief and freedom of worship, political freedom that is the right to choose who your ruler is and also choosing how to be ruled, and individual freedom from which is meant that people can act according to his or her own will. ...read more.

So these are two examples of countries with and also without religious freedom. Getting in deep with political freedom by which is meant the rights such as the one to vote for the person you want to win or to be elected, the one of free association and the right of free political expression. Political freedom allows people to choose who their rulers should be and also to choose how they shall be ruled. For example Colombia is a democratic country with political freedom because people have the rights to elect their rulers and how to be ruled. On the other hand is Germany that in the 1940's didn't have political freedom because there was a fascist government that didn't respect people's lives and individuals had to do what the dictator ordered or wanted to be done. ...read more.

But a country that in the last few years is reducing the people's individual freedom is Venezuela: the president is becoming a dictator and doesn't allow anyone to oppose him. Also the government is changing from a democratic government to a communist government. It is a requirement, besides a right to have religious, political and individual freedom because each of these three types of freedoms is very important because of what is said throughout the essay. Also each type of freedom is very important each in its own category/topic. If you have all the three types of freedom you can consider yourself a very happy person. This means that freedom is not just a basic human right, it is also one of the most important human rights, if not the most. Having no freedom will mean being oppressed by society, in fact nobody could live without at least one type of freedom. ...read more.