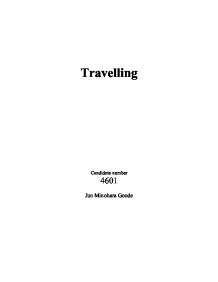 Travelling. I have been back to Japan every year for the past seven years. The first year I took Stephen, who was my fianc. The second year I went back with him again when he became my husband.

Travelling Candidate number 4601 Jun Minohara Goode I have been back to Japan every year for the past seven years. The first year I took Stephen, who was my fianc�. The second year I went back with him again when he became my husband. The third year, when we travelled in Japan, I was pregnant. The following year, we visited Japan with our 10-month-old son, Ken. Since then, my husband, my son and I have become good travelling partners and every year we have wonderful holidays in Japan. We always have a three week holiday and I always split them into three. My parents and friends live in Tokyo, so for the first few days in Japan we stay with my parents, then set off travelling for about 10 days, come back to Tokyo, enjoy shopping and going out with my friends for the rest of our holidays. Our main destinations are always the country side, where we really enjoy nature and the culture. The first two years, Stephen and I did long mountain walks in the Japanese Alps, carrying tents from peak to peak, at about 3000m level. We took our own food, yet, attracted by the cheerful atmosphere of mountain huts, we decided to have evening meals in the huts. In the canteens all the guests sat at the long tables laid in rows, like school. ...read more.

We stayed in Seoul for four days and left for Pusan where we took an over-night boat trip to Shimonoseki, the southen end of the main island of Japan. The following year, we visited Korea again. This time we went down to Hondo, a remote island in the south sea of Korea. The holiday on the island turned out quite differently to what I had expected. I was thinking of having a holiday lying on the beach and swimming in the sea for a few days. No sooner had I arrived on the island than I realized nobody was swimming or lying on the beach! It was the end of summer and many people were still arriving on the island. Where had they gone? Stephen suggested I shouldn't worry about other people, but swim. But how could I do it? Everyone would stare at me. Also, being in swim suits in public may not be acceptable on this island. When we couldn't find any suitable restaurants, our disappointment built up. There were not many restaurants on the island, all looked rather shabby but the price on the menus hanging on the walls were very expensive, compared to the price which we had paid in Seoul. Moreover, they were all written in Korean! Later, we realized Korean tourists come to this island to have local specialized food, sashimi (raw fish and seafood). ...read more.

I had grown up in Tokyo and had a job there. For people like me, it was difficult to believe how modest the islanders' life was. It looked like it hadn't changed much since the 1950s when I was born. An islander explained that every year about 100 people graduate from the secondary school in the island and the 100 young people leave the island, because there is no job for them so that the island's population has become smaller and smaller. We spent five days on the island, swimming with tropical fish and receiving a lot of treats from locals. (This time we also treated them a lot). Ken was extremely happy floating and splashing in the sea. However, it was such a shame that Ken didn't want to put his face down into the water where he would have seen plenty of fish swimming under the surface. If he had known, he would have been even more excited. (I must teach him how to swim properly for the next holiday.) Towards the end of the holiday, I realised the people living near the beach, where we stayed, knew everything that we were doing on the island. At that time gossiping about us seemed to be the most intriguing thing for them, since they had not many things to do and had to fill their extensive free time. This year we are planning to go to Ogasawara Island in the middle of the Pacific Ocean. We are looking forward to it very much. ...read more.