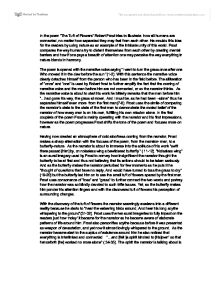 In the poem "The Tuft of Flowers" Robert Frost tries to illustrate how all humans are connected, no matter how separated they may feel from each other. He moulds this idea for the readers by using nature as an example of the intricate unity of this world. Frost compares the way humans try to distant themselves from each other by creating mental barriers and how if one pays a breadth of attention one may perceive the way everything in nature blends in harmony. The poem is opened with the narrative voice saying "I went to turn the grass once after one Who mowed it in the dew before the sun "(1-2). With this sentence the narrative voice clearly detaches himself from the person who has been in the field before. The alliteration of "once" and "one" is used by Robert frost to further amplify the fact that the coming of narrative voice and the man before him are not connected, or so the narrator thinks. ...read more.

As the narrator is about to immerse into the solitude of his work "swift there passed [him] by, on noiseless wing a bewildered butterfly " ( 11-12). "Noiseless wing" is an aural imagery used by Frost to convey how insignificant the narrator thought the butterfly to be at first and thus not believing that its actions should to be taken seriously. And as the butterfly makes the narrator perturbed for few moments as he puts it he "thought of questions that have no reply, And would have turned to toss the grass to dry" (19-20) but the butterfly led him on to see the small tuft of flowers spared by the first man. Frost uses consonance of "toss" and "grass" to further connect the two words and portray how the narrator was so blindly devoted to such trifle issues. ...read more.

They both appreciated their beauty and how nature benefited from them; now sharing this common trait the narrator realized that "Men work together...Whether they work together or apart" (39-40). As the narrator comes to a peaceful understanding of the fact that all men work towards one goal -success of human race, he accepts the world around him and intertwines himself with the nature and humanity. Through displaying nature and it's complicated relations Robert Frost proves that although many humans may perceive themselves as separate beings they too contribute to a large pool of humanity; no matter how small they are, in the end all the human acts interweave with each other and embed into each other's paths. Just like the narrator and the man who mowed the grass complete each other's works by doing their separate jobs and not really giving it much thought of how they actually do 'work together'. ...read more.