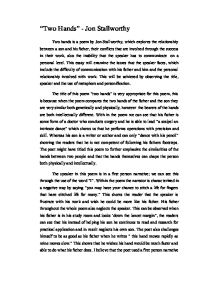 "Two Hands" - Jon Stallworthy Two hands is a poem by Jon Stallworthy, which explores the relationship between a son and his father, their conflicts that are involved through the success in their work, also the inability that the speaker has to communicate on a personal level. This essay will examine the issues that the speaker faces, which include the difficulty of communication with his father and him and the personal relationship involved with work. This will be achieved by observing the title, speaker and the use of metaphors and personification. The title of this poem "two hands" is very appropriate for this poem, this is because when the poem compares the two hands of the father and the son they are very similar both genetically and physically, however the bearers of the hands are both intellectually different. ...read more.

The speaker in this poem is in a first person narrative; we can see this through the use of the word "I". Within the poem the narrator is characterized in a negative way by saying "you may have your chance to stitch a life for fingers that have stitched life for many." This shows the reader that the speaker is frustrate with his work and wish he could be more like his father. His father throughout the whole poem also neglects the speaker. This can be observed when his father is in his study room and looks 'down the lancet margin", the readers can see that his instead of helping his son he continues to read and research for practical application and in result neglects his own son. ...read more.

Throughout the poem the author personifies the pencil and scalpel as they can both "dance", which in turn allows us to see the conflict that the poet has with his father. Alliteration is also used to help the poem flow with much ease, and example of this can be seen various times, "between breakfast", "spasm shakes" and "mine moves". By using these various figurative techniques such as alliteration and personification the poem is able to communicate on a greater level with readers by tapping into their minds and putting the message into their heads. In conclusion, the author uses the hands to reinforce the intimacy that he encounters with his dad, because him and his father don't have anything in common except for their hands. ...read more.