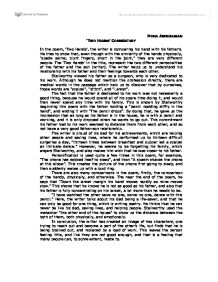 MONA ABULHASSAN 'TWO HANDS' COMMENTARY In the poem, 'Two Hands', the writer is comparing his hand with his father's. He tries to show that, even though with the similarity of the hands physically, "spade palms, blunt fingers, short in the joint," they are very different people. The 'Two Hands' in the title, represent the two different personalities of the father and the son (writer). The writer helps us to understand his relationship with his father and their feelings towards each other. Stallworthy viewed his father as a surgeon, who is very dedicated to his work. Although he does not mention the profession directly, there are medical words in the passage which help us to discover that by ourselves, those words are "scalpel", "stitch", and "Lancet". ...read more.

This commitment his father had to his work seemed to distance them from each other, and so not have a very good father-son relationship. The writer is proud of his dad for his achievements, which are helping other people and saving lives, where he performed up to thirteen difficult surgeries a day, "thirteen times between breakfast and supper led a scalpel an intricate dance." However, he seems to be forgetting his family, which angers Stallworthy, and also makes him wish that he was closer to his father. Personification is used quite a few times in this poem, for example, "The phone has sobbed itself to sleep", and then "A spasm shakes the phone at this elbow". ...read more.

"I have watched the other save no one, serve no one, dance with this pencil." Here, the writer talks about his dad being a life-saver, and that he can only be good for one thing, which is writing poetry. He thinks that he can never be like his dad, saving lives, and helping people. Stallworthy used the metaphor "the other end of the house" to show us the distance between the both of them, both physically, and emotionally. In conclusion, the writer has created an image of two characters, one trying to reach out and become a part of the other's life, but finds that he is being blocked out, and replaced by a load of work. This leaves the person feeling little, and like they are not good enough, and that is a feeling that many people can, to some extent, relate to. ...read more.