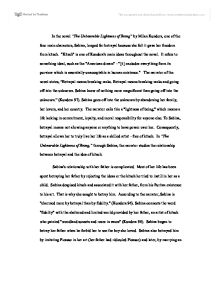 Unbearable Lightness of Being

In the novel "The Unbearable Lightness of Being" by Milan Kundera, one of the four main characters, Sabina, longed for betrayal because she felt it gave her freedom from kitsch. "Kitsch" is one of Kundera's main ideas throughout the novel. It refers to something ideal, such as the "American dream" - "[it] excludes everything from its purview which is essentially unacceptable in human existence." The narrator of the novel states, "Betrayal means breaking ranks. Betrayal means breaking ranks and going off into the unknown. Sabina knew of nothing more magnificent than going off into the unknown." (Kundera 97). Sabina goes off into the unknown by abandoning her family, her lovers, and her country. The narrator calls this a ''lightness of being,'' which means a life lacking in commitment, loyalty, and moral responsibility for anyone else. To Sabina, betrayal means not allowing anyone or anything to have power over her. Consequently, betrayal allows her to truly live her life as a skilled artist - free of kitsch. ...read more.

Whereas he hates the idea of betrayal, she views betrayal as the first step towards "going off into the unknown," the most magnificent thing she can think of. When Sabina "heard the golden horn of betrayal beckoning her in the distance...[s]he sensed an expanse of freedom before her." As with her father, she abandoned Franz and this betrayal freed her. Sabina also betrays her country, with at the time of the story was occupied by communists. Socialism is one expression of kitsch. Kitsch does away with creativity. It smothers every artists attempt to create an original masterpiece. Sabina's paintings are their own form of betrayal because through them Sabina rejects the values forced on her by the communist regime. On the surface of Sabina's painting, "there was always an impeccably realistic world, but underneath, behind the backdrop's cracked canvas, lurked something different, something mysterious or abstract." Sabina created an opportunity to draw something abstract, which was forbidden by socialism. ...read more.

(Kundera 91)" This shows Sabina's attraction to betrayal and her lifelong fight against kitsch. The individual who insists on his individuality is the enemy of kitsch, because kitsch forces conformity on its followers. If the hat is a symbol of her originality, then it is also a reminder that Sabina's enemy is kitsch. In the end, Sabina moves to California, farther away from her native country. Sabina gradually became "afraid of shutting herself into a grave and sinking into American earth."(Kundera 194). She had an image of a perfect final resting place that was nothing like American cemeteries. This image was actually just a kitsch. Since she had spent her whole life battling kitsch she could not surrender to it when she died, so "one day she composed a will in which she requested that her dead body be cremated and its ashes thrown to the winds." (Kundera 194). In a way, Sabina betrayed death by refusing to have a grave and to be put under a headstone. For Sabina, the act of being free from kitsch became the act of betrayal. Word Count: 1,038 ...read more.