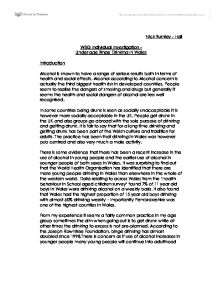 Under age Binge Drinking In Wales

Nick Burnley - Hall WBQ Individual Investigation - Under age Binge Drinking In Wales Introduction Alcohol is known to have a range of serious results both in terms of health and social effects. Alcohol according to Alcohol concern is actually the third biggest health risk in developed countries. People seem to realise the dangers of smoking and drugs but generally it seems the health and social dangers of alcohol are less well recognised. In some countries being drunk is seen as socially unacceptable it is however more socially acceptable in the UK. People get drunk in the UK and also groups go abroad with the sole purpose of drinking and getting drunk. It is fair to say that for a long time drinking and getting drunk has been part of the Welsh culture and tradition for adults. The practice has been that drinking in Wales was however pub centred and also very much a male activity. There is some evidence that there has been a recent increase in the use of alcohol in young people and the earlier use of alcohol in younger people of both sexes in Wales. It was surprising to find out that the World Health Organisation has identified that there are more young people drinking in Wales than elsewhere in the whole of the western world. ...read more.

This was up from 20% in 1997. In Finland, tax on alcohol was cut by 1/3 in March 2004, which led to a huge increase in alcohol related deaths and diseases. Christoffer Tigerstedt, a social researcher said "Among young people aged 16 to 17 years, binge drinking is more and more visible and definitely increasing." Spain's alcohol problem is minor compared with that of the United Kingdom. This is said to be due to the children being brought up with alcohol from a young age, hence why they are far more sensible drinkers. In March 2009, a 16 year old German pupil died from consuming over 50 tequila shots. Following this, the government decided to ban "drink all you can" parties, where guests could pay a certain amount to drink until they literally drop. It was at such a party where the 16-year-old had died. Although there are minor binge drinking issues in other European countries. In 2003, United Kingdom was ranked 6th out of all the countries in Europe and the United States for the prevalence of heavy drinking. Binge drinking in young people Binge drinking causes gastritis and the oesophagus can bleed. Deaths can occur in young people in particular because it is thought these young and inexperienced drinkers consume large amounts in short periods causing alcohol poisoning. Blood alcohol levels of more than 300-400mg % carry a high risk of death in the native drinker. ...read more.

Alcohol is addressed on the school curriculum and students as well as parents need to be aware of the facts and risks. The importance of the media and pricing and licensing laws is evident. Television, alcoholic drinks sports sponsorship and all contribute in some way. The police web site has some advice to reduce risks when drinking such as eating before drinking, not drinking quickly, sticking to one type of drink, soft drinks in between, and looking out for friends. It points out factors that some of the negative effects of drinking such as feeling ill afterwards and looking stupid. The publicity around Paul Gascoigne and George Best has perhaps done little to reduce incidence .Things that are important to young people might be more of a deteriant than the cancer and the health risks. Examples of side effects that might influence teenagers include weight gain, poor skin, making a fool of themselves and hangovers. It is helpful if young people have places to go such as youth clubs and places to go - rather than pubs or hanging around the streets. There needs to be realistic alternatives to pubs for young people. My local youth club was excellent and also did a lot of good work to raise awareness of alcohol related issues. The government has tried to introduce measures to help and tackle the issue and the resulting violence and anti social behaviour. The licensing laws have been changed to try and tackle the issue. ...read more.