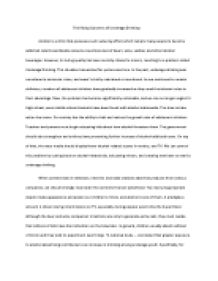 ﻿The Rising Concerns of Underage Drinking Alcohol is a drink that possesses such seducing effect which tempts many people to become addicted. Adults worldwide consume countless cans of beers, wine, vodkas, and other alcohol beverages. However, its luring quality has been secretly shared to minors, resulting to a problem called Underage Drinking. This situation has existed for quite some time. In the past, underage drinking was considered a miniscule crime, and wasn?t strictly restrained or monitored. As we continued to remain oblivious, numbers of adolescent drinkers have gradually increased as they used the tolerant rules to their advantage. Now, the problem has become significantly noticeable, and we can no longer neglect it. High school, even middle school students have been found with alcohol nationwide. The time to take action has come. Our society has the ability to halt and reduce the growth rate of adolescent drinkers. Teachers and parents must begin educating kids about how alcohol threatens them. The government should also strengthen and enforce laws preventing further increase of alcohol-addicted teens. On top of that, the mass media should display fewer alcohol related scenes in movies, and TV. We can control this problem by cutting back on alcohol-related ads, educating minors, and creating new laws to restrict underage drinking. When commercials in television, internet, and radio stations advertise products from various companies, we should strongly reconsider the contents that are advertised. ...read more.

Thus, drunken teens may violate the law and most likely arrests and court hearing often follows, depending on the severity of the crime. ?? Alcohol offenses, which exceeded 50% of all arrests in the early 1950s ? and continued to do so? (DrugLibrary News). No teenager would want to do their time in the miserable, unstable juvenile centers. Even after one has served their time, they would be tagged as a criminal for their remaining days of his/her life. This would negatively affect the person in many ways, such as job availability. When adolescents become informed about embarrassment and violence that is caused by alcohol, they may give second thoughts about starting to drink. Since the cons without a doubt outweigh the pros in drinking, fewer kids would select the option of drinking since they have been informed about the risks and senseless actions one may commit. Teachers must also inform students that alcohol significantly threatens the health of the teens. Since adolescents are still developing into mature adults, it is critical not to consume alcohol because it would affect their growth hormones. ?Drinking alcohol during this period of rapid growth and development (i.e., prior to or during puberty) may upset the critical hormonal balance necessary for normal development of organs, muscles, and bones? (Alcohol Alert). Since development of vital body parts are halted, teenagers wouldn?t receive the full benefits of puberty. ...read more.

Fights may often breakout between the child and parents, creating a distant relationship between them. Since alcoholics are not likely to lead a typical life, it is difficult for them to receive proper education, which in turn minimizes their career availability in the future, and would not be considered welfare. As a result, we must establish new laws preventing children to drink alcohol, since it is against the values of the Constitution. With all that in mind, ponder the options of either minimizing teen alcoholics with the methods stated above, or continue to ignore it. However, if this situation is left unattained, the numbers would continuously grow. We must fix this problem early, or as time passes by, the situation will become more challenging for us to solve. The ?blueprint? to save our children from a highly addictive and lethal chemical has been given to you, and you have the ability to bring it into reality. Tomorrow is too late; we must react today to save our future generation. Work Consulted ?Alcohol Advertising and Youth.? The Center On ALCOHOL MARKETING and Youth. 2008. 23 Feb, 2009. <http://camy.org/factsheets/index.php?FactsheetID=1> ?Alcohol Alert.? NIAAA National Institute on Alcohol Abuse and Alcoholism. National Institutes of Health. Department of Health and Human Services. Jan 2006. 19 Feb 2009. <http://pubs.niaaa.nih.gov/publications/AA67/AA67.htm> ?Alcohol.? TeensHealth Answers & Advice. Nov. 2006. Nemours Foundation. 25 Feb. 2009. <http://kidshealth.org/teen/drug_alcohol/alcohol/alcohol.html> ?DrugLibrary News ? Latest drug news from around the world.? Schaffer Library of Drug Policy. 25 Feb. 2009. <http://www.druglibrary.org/schaffer/library/graphs/alcviol.htm> Hanson, David J.?Alcohol Facts.? Alcohol Problems and Solutions 2007. 23 Feb, 2009. <http://www2.potsdam.edu/hansondj/index.html> ...read more.