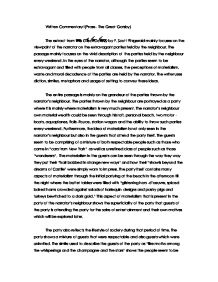 Written Commentary I(Prose- The Great Gatsby) The extract from The Great Gatsby by F. Scott Fitzgerald mainly focuses on the viewpoint of the narrator on the extravagant parties held by the neighbour. The passage mainly focuses on the vivid description of the parties held by the neighbour every weekend. In the eyes of the narrator, although the parties seem to be extravagant and filled with people from all classes, the perceptions of materialism, waste and moral decadence of the parties are held by the narrator. The writer uses diction, similes, metaphors and usage of setting to convey these ideas. The entire passage is mainly on the grandeur of the parties thrown by the narrator's neighbour. The parties thrown by the neighbour are portrayed as a party where it is mainly where materialism is very much present. The narrator's neighbour own material wealth could be seen through his raft, personal beach, two motor-boats, aquaplanes, Rolls-Royce, station wagon and the ability to throw such parties every weekend. Furthermore, the idea of materialism is not only seen in the narrator's neighbour but also in the guests that attend the party itself. The guests seem to be comprising of a mixture of both respectable people such as those who came in "cars from New York" as well as unrefined class of people such as those "wanderers". ...read more.

The "wanderers" were the uninvited guests who just intending to get a chance to attend such a grand party and to be able to mix with the upper classes. The "confident girls" were then there at the party intending to look for suitors or lovers among the party. There were also people such as the "gypsies" who wanted to seek attention among the guests. But even as she wanted to grab attention from the other guests, she had down a cocktail "for courage" before steeping out "along on the canvas platform". This shows that more often the motives of the guests were driven by alcohol. The alcohol can also be seen as the root of the entire party as it causes much of the excitement and the life of the party. The party featured "a bar" that was "stocked with gins and liquors and with cordials so long forgotten that most of his female guests were too young to know one from another". The alcohol during the party is seen to drive the party and it is the drink of courage as it loosens the guests to be able to socialise till the "air is alive with chatter and laughter". However, the alcohol does not attempt to form bonds between the guests but instead it is only temporary moments of socialising as "casual innuendo and introductions forgotten on the spot" are the way that the guests mix around. ...read more.

The crowd at the party could also be seen "tipped out at a cheerful word" showing that they were drunk at the party. The motives of particular guests further show the moral decadence as the party is used to their own advantage such as the "confident girls who weave here and there among the stouter and more stable". The usage of the party to find suitors or lovers is clearly abusing the privilege of being able to attend the party for their own purposes. In conclusion, the party is extravagant that it is but it also a party where materialism and superficiality. The party was "spilled with prodigality" and even the guests that attended had their own motives. The party further shows moral decadence as alcohol is present throughout the party and in free flow. However, it is also to be noted the entire viewpoint of the passage is from the narrator and hence may be bias. Besides, it is also to be noted that the party is shown from the perspective of the guests at the same time without the introduction or presence of the party host. This will cause a sense of irony that the host is missing causing a lack of order of the party or the party is driven by other factors such as the guests and alcohol. ...read more.