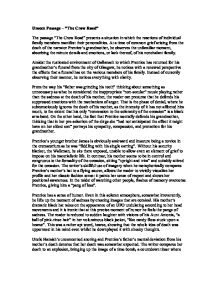 Unseen Passage - "The Crow Road" The passage "The Crow Road" presents a situation in which the reactions of individual family members manifest their personalities. At a time of common grief arising from the death of the narrator Prentice's grandmother, he observes the unfamiliar moment, absorbing the minute details and emotions, or lack thereof, of his nonchalant family. Amidst the rusticated environment of Gallanach to which Prentice has returned for his grandmother's funeral from the city of Glasgow, he notices with a renewed perspective the effects that a funeral has on the various members of his family. Instead of cursorily observing their manner, he notices everything with clarity. From the way his "father was grinding his teeth" thinking about something as unnecessary as what he considered the inappropriate "non-secular" music playing rather than the sadness at the death of his mother, the reader can presume that he defends his suppressed emotions with the mechanism of anger. That is the phase of denial, where he subconsciously ignores the death of his mother, as the intensity of it has not affected him much, to the extent that his only "concession to the solemnity of the occasion" is a black arm-band. ...read more.

Prentice has a sense of humor. Even in this solemn atmosphere, somewhat irreverently, he lifts up the moment of sadness by creating images that are comical. His mother's dramatic black hat takes on the appearance of an UFO undulating according to her head movements and it is ironic that at this precise moment of humor he feels the pangs of sadness. The reader is reduced to sudden laughter with visions of his Aunt Antonia, "a ball of pink-rinse hair" in her voluminous black jacket, "like candy floss stuck upon a hearse". This was a rather apt word, hearse, showing that the whole idea of death was uppermost in his mind even whilst he downplayed it with cheeky thoughts. Uncle Hamish's unconcerned snoring and Prentice's father's mental deviation from his mother's death denotes that her death was somewhat expected. The writer compares her death to an explosion, bringing up the image of a time bomb, a countdown timer where the inevitability of time ends her life. I also noted that Prentice has memories of her in a wheelchair, implying her sickness. ...read more.

All the characters seem to move on quickly, and there is no mention of tears or sobs. The black sock and white sock represent his state of mind, where he grapples between the memory of the past and the future without his grandmother. It also reveals the crossing over to the other side, a place of a whiter and purer color. The final thought is the most significant one. It indicates how Prentice pushed his grandmother's wheelchair, and accompanied her partly through her journey of life, "out of the house", "through the courtyard" "past the outhouses" to "the loch and the sea". He knew she was going to die, but he tried his best to make her last moments comfortable and pleasant, and when he took her on this outing, he vicariously experienced his future reactions towards her death. His loyalty and devotion towards his grandmother is highlighted here. When he "rubbed without enthusiasm at the black herring-bone pattern the oily wheel had left", he indirectly and simultaneously tried to erase her memories from his future, a sign of moving on, just like the rest of his family. ...read more.