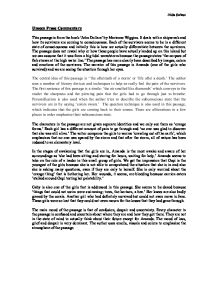 Unseen Prose Commentary This passage is from the book 'John Dollars' by Marianne Wiggins. It deals with a shipwreck and how its survivors are coming to consciousness. Each of the survivors seems to be in a different state of consciousness and initially this is how we actually differentiate between the survivors. The passage does not reveal why or how these people have actually landed up on this island but we can assume that it was from a big tidal wave/storm because the passage states 'the corpses of fish strewn at the high water line.' The passage has more clearly been described by images, colors and emotions of the survivors. The narrator of this passage is Amanda (one of the girls who survived) ...read more.

The question technique is also used in this passage, which indicates that the girls are coming back to their senses. There are alliterations in a few places in order emphasize their subconscious state. The characters in the passage are not given separate identities and we only see them as 'orange forms.' Each girl has a different amount of pain to go through and 'no one was glad to discover that she was still alive.' The writer compares the girls to worms 'crawling out of the earth', which emphasizes that no one was spared by the storm and that after the storm, all of nature has been reduced to an elementary level. In the stages of awakening that the girls are in, Amanda is the most awake and aware of her surroundings as 'she had been sitting and staring for hours, waiting for help.' ...read more.

Gaby is also one of the girls that is addressed in this passage. She seems to be dazed because 'things that could not swim were swimming: trees, the horizon, a bee.' Her knees are also badly grazed by the corals. Another girl who had definitely survived but could not even move is Jane. These girls were so lost that they could not even mourn for the losses that they had gone through. The main mood of the passage is that of confusion, despair and uncertainty. Every character in the passage is confused and uncertain about where they are and how they got there. They are not in the state of mind to actually think about their future except for Amanda. The mood of loss, grief and despair is very dominant. The author uses smells, visuals and colors to emphasize the atmosphere of the passage. -Nida Safawi ...read more.