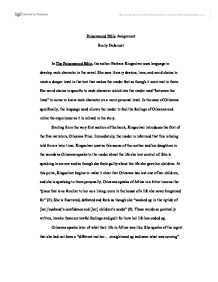 Use of Language in the Poisonwood Bible

Poisonwood Bible Assignment Emily DeJarnett In The Poisonwood Bible, the author Barbara Kingsolver uses language to develop each character in the novel. She uses literary devices, tone, and word choice to reach a deeper level in the text that makes the reader feel as though it were real to them. Her word choice is specific to each character which lets the reader read "between the lines" to come to know each character on a more personal level. In the case of Orleanna specifically, the language used allows the reader to feel the feelings of Orleanna and relive the experience as it is relived in the story. Starting from the very first section of the book, Kingsolver introduces the first of the five narrators, Orleanna Price. Immediately, the reader is informed that this is being told from a later time. Kingsolver creates this scene of the mother and her daughters in the woods as Orleanna speaks to the reader about the life she lost control of. She is speaking in sorrow and as though she feels guilty about the life she gave her children. ...read more.

Orleanna refers to her own wedding day where she began to "lose" herself. Her wedding day, a day that should be one of her fondest memories, is seen as one of days where she lost what was most important to her. Kingsolver begins to show through the words that she uses this inner conflict in Orleanna that makes her question whether she should stay with her family, or go out and regain who she was before the move to the Congo. "The hardest work of every day," she states "was deciding, once again, to stay with my family." (91) Orleanna couldn't bear the thought of leaving her children, but her unhappiness was making life so unbearable, as is shown through such harsh words. As time progresses, Orleanna becomes more defeated and frustrated. She tries to defend herself as to why she didn't get out sooner, but her words become angrier. Kingsolver uses this angry tone when Orleanna speaks almost as though she were talking to herself "that the thing you love more than this world grew from a devil's seed. ...read more.

She is so defeated and drained, that the loss of her child overwhelms her with grief and guilt. She forces herself to "keep walking" for the sake of her daughters. Finally, a shift occurs in Orleanna. Her words become more confident and forceful proving that Orleanna has gained the courage to do what she must do in order to save her children; she must leave her husband. This choice shows the bravery of this woman who lost so much. She was still able to do what was right for herself and her other daughters, despite all her guilt over losing one child. In such a powerful ending to the story, Kingsolver ends the story with a narrative by Ruth May forgiving her mother for all that has happened. This brings peace to Orleanna, bringing a comfortable end to a heart-wrenching story. Kingsolver develops Orleanna's character more throughout the story, in the tone that she speaks with and the words she uses, as both a mother who cares deeply for her family, but also a young woman who is yearning for the independence and passion she once had in her life and marriage. ...read more.