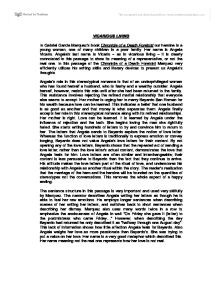 VICARIOUS LIVING In Gabriel Garcia Marquez's book Chronicle of a Death Foretold our heroine is a young woman, one of many children in a poor family. Her name is Angela Vicario. Angela's last name is Vicario - as in vicarious living - it is clearly connotated in this passage to show its meaning of a representative, or not the real one. In this passage of the Chronicle of a Death Foretold Marquez very efficiently utilizes his writing skills and literary devices to present us Angela's thoughts. Angela's role in this stereotypical romance is that of an underprivileged woman who has found herself a husband, who is flashy and a wealthy outsider. Angela herself, however, resists this role until after she had been returned to the family. This resistance involves rejecting the refined marital relationship that everyone else seems to accept. Her mother is urging her to marry Bayardo San Roman for his wealth because love can be learned. ...read more.

The reader's realization that the marriage of the hero and the heroine will be founded on the quantities of stereotypes not the conversations. This removes the whole aspect of a happy ending. The sentence structure in this passage is very important and used very skilfully by Marquez. The narrator describes Angela writing her letters as though he is able to feel her raw emotions. He employs longer sentences when describing scenes of her writing her letters, and switches back to short sentences when describing her dismay. Marquez also uses many words twice in a row to emphasize the anxiousness of Angela in wait "On Friday she gave it (letter) to the postmistress who came Friday..." However, when describing the day Bayardo had returned he only described it as "halfway through one August day". This lack of information shows how little affection Angela feels for Bayardo. Also Angela weighs her love as more passionate than Bayardo's. She was trying to put a value on her love. Her name is a very good metaphor which described this. ...read more.

The contrast Marquez provides between the past and present represents to the reader his love and passion for Angela. Moreover, Marquez also uses embroidery several times in this passage. Embroidery is connotated positively in this passage to symbolize an invisible thread that ties together both Angela and Bayardo. The letters are the invisible thread between the two. Angela reaches consciousness through a protracted process of letter writing. This is clearly the function of the letters, which are never opened by her Bayardo. As the letters progress they mature and grow with Angela. Each letter has a beautiful crescendo quality and each letter shows Angela's growth spiritually and mentally. This passage is not one of the major important passages in the story, since it does not give more information on the murder of Santiago; however, what this passage does provide is a key understanding of how Angela's mind works. She has been like a prisoner, just writing letters and just hoping to be free one day. Writing all those letters Angela comes out at the end as a liberated woman, individuated and separate. She achieves the emancipation through the magic of the letter. ...read more.